Rationing in WWII and my War Ration diet begins


I have been living a 1942 lifestyle in many ways for the past three months. I have not bought anything new for myself, sticking to the ‘make do and mend’ principle. I have been doing well, and even in my un-rationed goods, such as cosmetics, I have bought only one lipstick and a box of hair dye (and trimmed and colored my own hair).

I have been tending my ‘Victory garden’ – passionfruit, bananas and some greens and herbs are doing well. I even have coffee berries – although I am not quite sure how to turn them into coffee!

I am aiming to sew a few 1940s dresses from original patterns, but I have been putting it off. I keep thinking that I will lose weight. Of course, I haven’t. I haven’t really tried either – I am still quite partial to a glass or two of red and a packet of crisps in the evening. Now, however, I have been thinking that it’s time to really try and adopt the lifestyle and eating habits of 1942 – and following rationing. 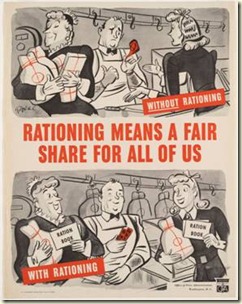 In Australia rationing regulations for food and clothing were strictly introduced in mid-1942. Tea was the first thing to be rationed, on this day in 1942 as it happens, as supply was limited after Japan occupied the areas of tea growing in the pacific. All Australians over the age of nine were required to register with a tea supplier, and were able to receive one ounce of tea per week, which had to be purchased fortnightly or monthly. The tea rationing caused great inconvenience for Australians as it was a cultural food. I don’t drink tea at present, so this won’t present a problem for me.  Coffee was not rationed, as there not many coffee drinkers at the time.  I only have two cups of coffee per day, so I won’t really need to change that habit, but I will stick to the amount given for tea.

Sugar was added to the ration list in August 1942. Every Australian civilian was allocated 500 grams or 18 ounces of sugar per week, unless they were given permission to make jam to be shared around. I don’t really have a sweet tooth, so I should be ok with this – I may save up my rations for baking a batch of biscuits.

Butter was rationed to eight ounces, or 227grams a week in June 1943, and reduced to six ounces, or 170gm, in 1944. I do love butter, so this could be hard. From time to time eggs and milk were also rationed during periods of shortage. One of my projects this year it to get chickens, so this will be a help. Fruit and vegetables were not rationed, but again they could be hard to find, and many people grew their own. Processed foods were few, and frozen foods non-existent, but flour and bread were not rationed. 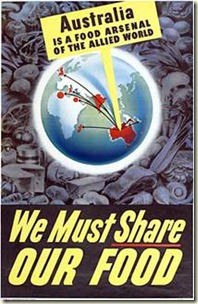 Meat rationing was introduced in January 1944, as the government intended to export more meat to the United Kingdom.  Sausages were exempt, as they were made of many different kinds of meat, and poultry and fish weren’t classified as meat.  Rabbit and the off-cuts of meat, such as brains, tripe, livers and kidneys were more readily available and coupon free, and formed a significant part of people's diets.  It was decided, however, that the meat ration for Australian adults would be 2.2 pounds, or just under one kilo, of meat a week, including beef, lamb, veal and mutton.  I mainly eat fish and chicken at present, so this should not be a hardship, although I will aim to eat more off-cuts, and less choice cuts.
In the UK the weekly rationed diet was slightly harsher than the Australian equivalent- approximately this for a person a week:

It’s interesting that Britons were allowed more tea than Australians!
I will start my diet along the UK lines, but will replace tea with coffee, and use local macadamia nut oil instead of the cooking fat and marg at times.  This is it (but the milk bottle will get filled two more times, and I will swap the ‘candy’ for dark chocolate when I get some):
So a meal of bacon an egg(s) uses the whole weeks ration of these things!
Food will also be limited to what was available in Australia at the time, including cereals (rice, oats, corn flakes, all bran and rice bubbles), spreads like vegemite, local honey and jam, flour, and fresh local fruit and veg if possible.  Tropical fruit will feature as I live in Queensland. 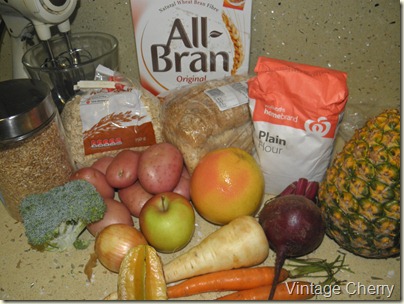 I aim to start with two weeks,  and see how I go.   The way our local shops are running out of produce because of the rain and the roads being cut, and the Tornado this morning (something rarely seen in Australia) rationing may become reality for everyone in Mackay!

I start tomorrow.  I’ll post menus,photos and vintage ads of some of the products I may try,  and let you know if I lose any weight each week.
Wish me luck!