Food today – all leftovers, due to being super busy (a full day of work plus hubby away).
Porridge  and coffee for breaky, soup (blended form last nights stew) and some pineapple for lunch, and a baked potato with left over beef Bourguignon for dinner.  Not very exciting (but cheap and cheerful), and I did have a glass of red wine. 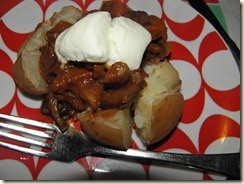 In the news today, a  RAAF Lockheed Hudson A16-139 crashed at Kilsyth, a suburb of Melbourne at the foothills of Mt. Dandenong in Victoria on 26 March 1942. Apparently the aircraft flew over houses at tree top level on its landing run, following the route of the proposed freeway and sliced the top off a pine tree just after crossing a road.  It came to rest with the wings against two large pine trees at the other end of the paddock.   The trees are still in existence and still show the scars.

Many references also state that the 1st "Eichmann transport" to Auschwitz & Birkenau Camps began on this day in 1942, but I can’t find real evidence for this.  However, the transports were real, and you can read more of this horrendous story here., and about the first 700 Jews from Polish Lvov-district reaching concentration camp Belzec here.  There were also work camps in Finland where Russians from the newly annexed Karelia were sent, and in occupied Europe, where captured civilians and soldiers were sent (including in Holland where my grandfather was sent to a work camp).

Russian children in a concentration camp in Finland, 1942  Source
Another story going around for this day is that 20 tons of gelignite in a stone quarry at Easton Pennsylvania killed 21 people.  I have actually found a real story about an explosion of 30 tons of gelignite or  4,000 sticks of TNT (estimated to be enough to dislodge 120,000 tons of cement rock) that took 31 lives at the Lehigh Portland Cement Co. 's quarry near Sandt Eddy, Lower Mount Bethal Township, Northampton County.  You can read a true account here.

Lastly for today, the German offensive in North-Africa under Col-general Rommel began.  You can read more about that and Rommel here.