On April 26, 1942 eleven P-39 Airplanes were ditched on Cape York peninsula in North Queensland.  You read about this disastrous mission here.

Meanwhile, at the  Honkeiko Colliery in China, 1,549 miners died in a mine operated in Japanese occupied Manchuria.  Although China has a horrible history of mine safety, this was probably the worst mining disaster of all time.  The Japanese also culpable in this accident as they working the Chinese miners as slave/prisoner of war labour.

In Northumberland, England, in 1942, Pit Ponies were still helping men mine for coal, by hauling up to 30 tons of coal in tubs on the underground narrow gauge railway.   The pit ponies were often stabled underground, working an 8-12 hour shift each day,  and only coming up to the surface during the pits' annual holidays.  Ponies were first used in mines, replacing children, in the UKs  Durham coalfield in 1750,  and at the height of Pit Pony usage in the UK in 1913, there were 70,000 working in the mines.  As of 1984, there were 55 still in service.  The last pony, Robbie, retired in 1999 . 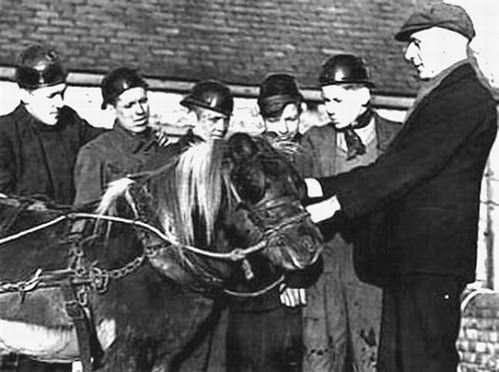 Coal Mining Trainees and a Pit Pony getting groomed XMAS 1942.

Pit ponies and coal horses were also used in the US and  Australia. At the end of their working lives they were either sent to the knacker or released into the bush. The ponies  didn’t know herd behaviour and they didn’t understand paddocks so were hard to keep.  Many didn’t survive long,as not only could they not cope with life ‘outside’, they often suffered respiratory diseases similar to human miners.  Horse & Man has a great article with photos if you want to read more about pit ponies.

Many UK miners had enlisted in the army which meant that the mines needed to recruit new miners. Coal was needed for gas and steel production, as well as electricity generation, so productive coal pits were vital to supplying the war machine with power.  As well as volunteers, from December 1943 men were chosen at random from conscripts (aged 18 to 25) to work in the mines across the UK.  These miners were known as the Bevin Boys, named after Ernest Bevin, Minister of Labour and National Service in the wartime coalition government.

There were nearly 48,000 Bevin Boys in the UK until 1948, when the program ended.  Despite their vital service in the mines, the Bevin Boys received no medals, and didn’t even have the right to return to the jobs they had held previously, unlike armed forces personnel. Bevin Boys were not fully recognised as contributors to the war effort until 1995, 50 years after VE Day, in a speech by Queen Elizabeth II.

The BBC series Coal House at War features Bevin boys and shows part of their training and hardships.  They aren’t in the first episode, that I have here, but this series is worth watching from the start! 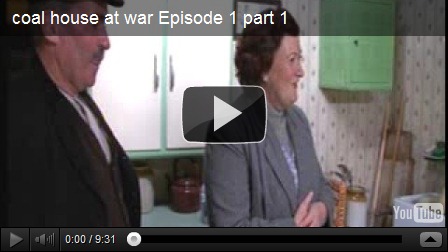 An Australian documentary movie ,“Power to Win” was made in 1942 to emphasise the contribution of Australia’s coal mining industry to fighting the war in Europe. It includes historical wartime footage, dramatised scenes and documentary segments.  You can see a clip here.

A scene from ‘Power to Win’ where father and daughter have a candid talk, and the daughter proudly says that she’ll marry a miner and stay where she is because 'big things’ are happening and 'coal is the essence of all power’, a power which will allow them to win the war.

If you want to marry a miner, come here to Mackay – we have lots!