Today in 2012 it’s Good Friday, so we have been busy baking Easter buns. 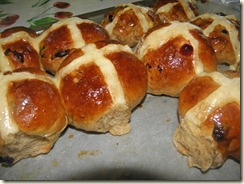 Here’s the recipe we used.

Today in 1942 (Easter Monday) 10 DC-3's of Pan American Airways begin hauling 30,000 gallons of fuel and 500 gallons of lubricants from Calcutta to the airstrip at Asansol Airfield, completing the mission on the following day.  This fuel was for use by Lieutenant Colonel James Doolittle's Tokyo raiders, already at sea aboard the aircraft carrier USS Hornet
HMAS GERALDTON was commissioned at Sydney on tis day in 1942, under the command of Harold M. Harris .  She was one of sixty Australian Minesweepers (commonly known as corvettes) built during World War II in Australian shipyards as part of the Commonwealth Government's wartime shipbuilding programme.   GERALDTON was employed on patrol duties off the east coast of Australia for a short before leaving to join the Eastern Fleet in July 1942, and going to Colombo.

Also on this day an RAAF plane is damaged in combat and ditched.   Pilot Les Jackson exchanged fire and claimed hits on two Zeros that made head on passes against him, and damaged his engine. He made a forced landing outside Port Moresby on a coral reef in about six feet of water.  One pilot recalled (p28),
“The engine sat down with the wings and tail high and dry. As the rest of us came down towards the strip, Les stood out on one wing waving his arms and doing a jig, obviously to indicate he was OK. I heard John Jackson call 'there's a kite on the reef. The pilot's OK - jumping about. Seems a happy sort of chap.' John hadn't recognized his brother."

Flight Lieutenant Jackson (second from left) with fellow pilots of No. 75 Squadron in Port Moresby, 1942 Source
Jackson was born in Brisbane, Queensland, and had joined the air force before war broke out in 1937, after first training as an accountant.
Here is a lovely short movie of Easter Bonnets in New York, 1942. 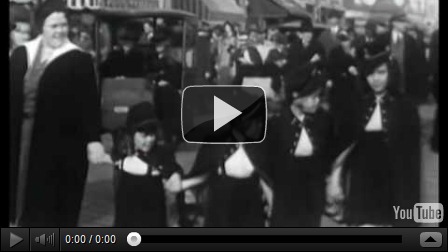