I have been waiting for 20 June so I could post this cover - and of course I missed it!
Anyway, here it is, the cover of The Saturday Evening Post Magazine, 20 June 1942, titled "Woman at Dude Ranch". 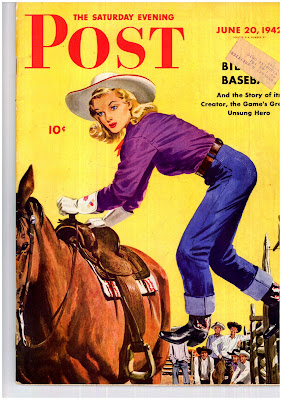 The cover was designed by Fred Ludekens (you can just see his name in the bottom right on the fence). Born in California in 1900, Fred had no formal training in art, but began as a billboard painter for Foster and Kleiser after wroking for a few years on a fishing boat.  He joined the advertising agency of Lord & Thomas in 1931, and transferred to the company's New York City office in 1939, which is where he would have been when this cover was produced.  He worked in a variety of media, and often depicted rural scenes such as fruit ranches, coastal scenes, and the Indians of the Southwest. As well as the  The Saturday Evening Post,  he produced work for The American Magazine, Good Housekeeping, The Country Gentleman, Fortune and True, and also illustrated many books. Here is an example of one of his war time posters.

You can see more of his work here, and even buy a copy of the Post cover.