The hat event of the year

The Melbourne Cup was all about hats.
Ok, so it was about horses too, but mainly about hats. And fascinators - those things that do little to keep out the strong Australian sun.
Tall ones.
Sideways ones.

And lots of flowers.
Big flowers were very popular.

And flowers with feathers. I think this one is my favourite.

Maybe next year I could get something like this large satellite hat by Patrica Keech.


It has a bit of a Victorian feel, like this hat worn by Grace la Rue in 1903, and would keep the sun out at least! 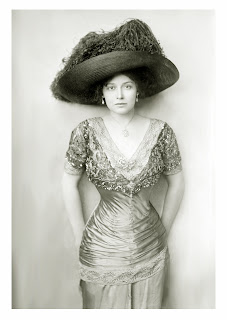 Isn't she stunning?
A Victorian feel too with this hat worn by Margaret Woods  in 1962, winner of the first Melbourne Cup Carnival “Fashions on the Field” competition.


In the days when hats were compulsory, along with gloves, stockings, and dresses that reached to the knees.  The days before Jean Shrimpton appeared at Derby Day stocking-less, gloveless and hatless in 1965.

Jean's outfit scandalised the ultra-conservative Melbourne establishment, for whom the Spring Racing Carnival was the social and fashion event of the year, and she was the target of catcalls from men and jeers from women.  She says in her memoirs:

"The day of the races was a hot one, so I didn't bother to wear any stockings. My legs were still brown from the summer, and as the dress was short it was hardly formal. I had no hat or gloves with me, for the very good reason that I owned neither. I went downstairs cheerfully from my hotel room, all regardless of what was to come."

Jean said in a statement: "I think you should dress to please yourself," but admitting that she had been disciplined by her sponsors dressed more conservatively three days later for the cup, in a three-piece grey suit with an ice-blue straw Breton hat, beige gloves and stockings, and a chocolate-brown handbag.

Like Michael J Fox in Back to the Future she ruefully observed: "I feel Melbourne isn't ready for me yet."

Did you don a hat for the Cup?