Yesterday the Melbourne Cup was run at Flemington Racecourse in Melbourne. None of the favourites won, which shocked a few people, and the race was won by Green Moon. The runner up was Fiorente, and third Jakkalberry. The Quinella was something like 500/1 and the Trifecta was 48545/1! If only......

The Melbourne Cup is Australia's major Thoroughbred horse race. Marketed as "the race that stops a nation",  which it really does.  Even here in Mackay, over 3000 km from Melbourne, offices shut at lunch time to enjoy cup day lunches and to watch to excitement on the big screen.  It’s a great excuse to wear a pretty dress and hat, and to drink champagne!


The race itself is long - 3,200m, or two miles, and it is one of the richest turf races in the world.
On Thursday, 7 November 1861, a crowd of 4000 gathered at Flemington to witness the first Melbourne Cup, which offered the largest purse for a race in Australia to that time - First prize was a gold watch and £170. The Victorian Turf Club announced that the Melbourne Cup was to be a fair contest in which the best horses would be handicapped, ie. weighted down, to make the race more equal. Older horses were given more weight than younger ones and weightings were adjusted according to the horse's previous results.
The course itself was little more than a haphazard path cut out among tall grass on the rough river flats, although there were races there every year since 1840 when Melbourne as a town was barely five years old.  A track was marked out across the river flat using posts, and the jockeys had to make sure their horses ran around the outside of each one.  The name 'Flemington' was not used until the 1850s. It is believed that a man named Robert Fleming sailed down the Saltwater River (now the Maribyrnong) and stopped and built a house on the land that is now the racecourse. He and his wife had a family of four children and their livelihood was farming cattle and sheep, and he established a butchery on the site later taken by the racecourse. A butchery beside the Saltwater (Maribyrnong) River would have been in keeping with the river's later use for noxious outfalls, and the near by new market area was the site of an abattoir and saleyards until the 1980s (when I lived their in the late 80s the abattoir had closed, and the cattle-yards were empty - fox and rabbits abounded and it was a great place to walk the dog!) As time went on, the property became known as Fleming Town. The Flemings granted permission to Melbourne's racing administrators to conduct race meetings on their land and this is how the name 'Flemington' came about.

There were 17 starters, and a fall during the race brought down three horses, killing two and breaking a jockey's arm, but the field kept going. Archer, a Sydney "outsider", won the race, beating a local favourite, Mormon .  Archer was trained at Terrara by Etienne de Mestre, who set up a stud, stable and race track where unofficial races were held.  He took Archer the 500 plus-miles to Melbourne by ship to run in the inaugural running of the Cup.  The next day he won the two mile Melbourne Town Plate, and  was back at Flemington the next year to win the Melbourne Cup again, a feat not repeated until Peter Pan won the race twice more than seventy years later.

Flemington was fairly basic in the early days with little in the way of running rails or stands. But the Melbourne Cup quickly became popular as a carnival with picnic parties, sideshows, celebrations and people showing off their latest fashions. Socialites, politicians and Australia's rich and famous attended the Cup right from the earliest days, as they still do today.  In the 1860s Victoria was experiencing the gold rush and many people had flocked to Melbourne, Bendigo and Ballarat in the hope of finding gold. A few gold-diggers were fortunate and became wealthy, and they enjoyed splurging at Flemington.

In 1886 Flemington Racecourse was the site of Australia’s first cinematographic newsreel, and in 1875 race day changed to a Tuesday. It has since usualy been run on the first Tuesday in November each year, except during three of the five years during the Second World War (1942, 1943 and 1944) when it was held on a Saturday. In 1877, the first Tuesday in November was officially declared a public holiday in Melbourne which ensured crowds flocked to the track. By 1880, 100,000 people would make the journey from the country and other colonies to Flemington to attend the Cup, which boosted Melbourne’s population four-fold.
"There was barely standing room on the lawn and many ladies were unable to find a seat for the whole day. The Paddock was overcrowded to excess and the Hill was simply a mass of human beings. It has reached a stage now that almost everyone in Melbourne goes to the Spring racing." - Australasian Newspaper (1871) 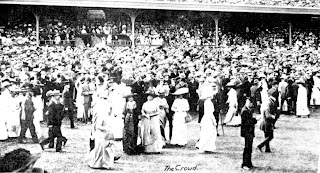 Nothing much has changed – the lawn is still crowded and many people enjoy their picnics in the car park, never making into the race course itself. The Cup itself is now made up of 34 pieces of hand-beaten eighteen carat gold and a lathe-produced base, and is worth $150,000. Every year the Melbourne Cup trophy is awarded as a prize. There is also $6,200,000 to be divided by the winners.

The Race That Stops a Nation by Vivienne McCredie

But once a year at Flemington

A horse race stops us all
And we hold our breaths and listen
To the commentator’s call
For never has there been a race
That holds such fascination
Than the race they run at Flemington,
The Race that stops the nation
We Aussies are a funny lot,
The things we hold so dear -
Like Rosewall, Hoad, the Opera House,
A glass of Fosters beer
Let’s not forget the Great White Shark,
And Lillee – in full flight,
The Wallabies, the Kangaroos,
The Harbour Bridge at Night,
Of course it’s something special
When we say the name of ‘DON’,
Our Bradman was the best they’ve seen;
His legend carries on
On a Tuesday in November,
The first one to be sure,
As the winner flashes past the post,
You’ll hear the thousands roar.
For never has there been a race
To catch imagination
Than the race that’s run at Flemington
The race that stops the nation!
It’s called “the Cup” – the Melbourne Cup. Beginning naturally
When a horse called Archer walked
Into a place in history.
And since that year of ’61,
By the way, all these images can be found on tumblr, with the correct source.
deb xx
Posted by Deb Clark at 11:27