A few weeks ago I posted a photo of orange and blue oriental print dress pyjamas, which I loved, and inspired me to find more, as in my post last Friday.  Today, as it's time for a history post, a little look at how pyjamas, or pajamas, came to be considered fashion.

During the 1920s Chanel and Vionnet had promoted silky, luxe pyjamas as evening wear to wear in private, and   Paul Poiret promoted then as avant garde dress, known as harem pants.  Only the brave woman would wear them!

By the late 1920's pyjamas appeared outside the bedroom as swimsuit cover-ups on the beaches and boats of the French Riviera, and then on the beaches (and streets)of Britain.

They soon became a double-duty garment for the relaxed resort lifestyle - could you could wear them on the beach and then drift on to a cocktail party.
In 1931, Vogue magazine declared, "A woman may and does wear pyjamas to quite formal dinners in her own house, to other people's dinners in town and country if you know them well and the more iconoclastic members of the female sex even wear them to the theatre."

Alongside fall/winter and spring/summer fashions, resort wear became a fifth "season" for which garments were designed. Resort wear was, and still is, loosely defined, characterized largely by its bright colours, patterns and suitability for warm climates, often near the water, conjuring up images of beaches, sun and sand. 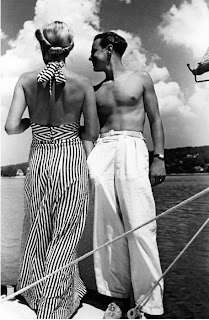 And in typical German style, like Burda magazine today, even children wore them. 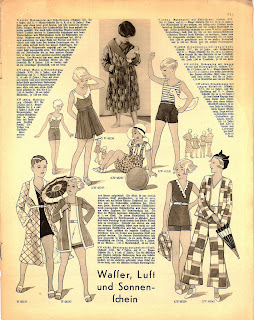 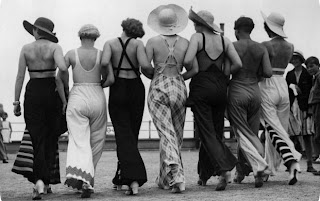 For women who aspired to a resort lifestyle but didn't have the necessary means or leisure, pyjamas could be worn for entertaining or relaxing at home, hence the term 'lounge pyjama's.  Often beach or lounge pyjamas were two-piece ensembles, sometimes with a matching jacket, but there were also one piece versions.


According to period fashion illustrations, beach/lounge pyjamas were similar in appearance to sleeping pyjamas, with wide legs,  and sometimes, as in the ad above, they were advertised as day and beach wear - great for those girls who partied all night! Usually lace or silk satin indicated night-time wear, especially plain colours, while fabrics like  linen, cotton or silk shantung (or the rayon equivalents)  were used for day lounging and beach pyjamas. Women of all ages, and shapes, wore beach pyjamas.

In 1929 movie fashion designer Gilbert Adrian dressed Greta Garbo in a striped pyjama ensemble in the film The Single Standard.
Adrian also designed pyjamas for Joan Crawford's flapper trilogy of 'Our Modern Maidens', 'Our Dancing Daughters' and 'Our Blushing Brides'. Movies and movie stars did more to influence fashion in the 30s and 40s than Vogue magazine, as they were seen by such a large audience.


Warner Brothers designer Orry-Kelly also like beach pyjamas.  Here is Joan Blondell in beach pyjamas he designed, in the early 1930's. Bette Davis is in the swimsuit. 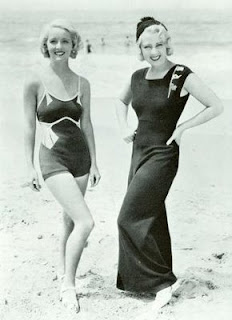 Many picture goers, especially in the 30s, had no hope of being able to purchase a pair of designer pyjamas  but they could of course sew their own.
.
There are reproduction patterns available if you want to sew yourself a pair, such as this 1933 one from Mrs Depew Vintage. I love the sleeves.

Lounging pyjamas saw a bit of a resurgence in the 60s and 70s, and there have been some more recent interpretations as well.

Our summer is almost over, but I would love a pair for next Summer. What about you?

And of course, more images on tumblr - and I have just put a badge for instagram, if you want to follow me. usually the posts are more personal, with lots of photos of the beach and kids. if your on instagram, please let me know in the comments, and I will follow you too .