Yesterday I wrote about the blackout and what people did to be seen in the dark.

As well as getting injured by not being seen, other people were injured during the Blackout because they couldn’t see where they were going themselves, and were tripped up or fell down steps.

What to do? Eat carrots of course! Here is a snippet from the UK Times, 6 February,1942

Dr Carrot? The slogan "Carrots keep you healthy and help you see in the blackout" was used extensively during WWII.  Along with cabbage, carrots were readily grown in victory gardens, and the Ministry of Agriculture promoted carrots heavily as a substitute for other less readily available vegetables and fruit. In late 1941, Britain’s food minister, Lord Woolston, asked Walt Disney if he could help the British Government promote carrots as a nutritious food source – Disney agreed and the carrot family and Dr Carrot were born. 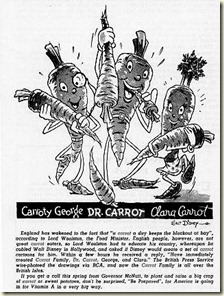 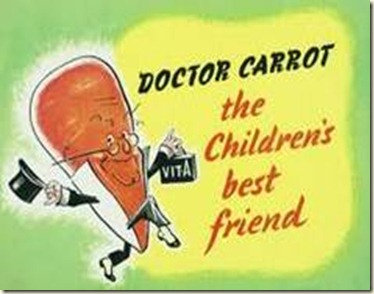 The Air Ministry also spread the word that a diet of carrots helped pilots see Nazi bombers attacking at night (this was actually a tricky explanation to cover the new radar systems aboard their planes). What a great way to get kids to eat their carrots!

IMPORTANCE OF VITAMIN A (By ELIZABETH COOKE)

“Of all the vitamin discoveries which have been made during recent years, of particular interest at the Present time is that you can definitely help yourself to see better in the blackout by having plenty of vitamin A foods in your daily diet

Vitamin A is closely concerned with the proper, functioning of the eyes. It also helps' to protect you from such infections as colds and influenza, and so has a doubly important place in the maintenance of good health.

Experiments have shown that you I can definitely improve the dark adaptation of your eyes by eating foods I which provide plenty of vitamin A. Among- these foods are carrots, cabbage and spinach, dried apricots, also dairy products ... All of these I are everyday foods which should always have a regular place in a healthful diet.

They are more valuable than ever for well-being under wartime, conditions, and so these days every house- wife should plan to include more of I these vital foods regularly in the family's daily meals.” 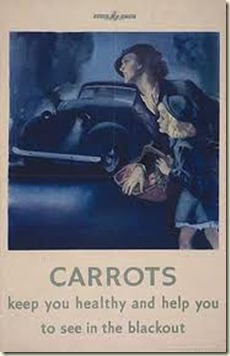 More advertising ensued, and the people responded. More carrots were eaten and numerous and bizarre recipes for carrots emerged, such as this one:

1 gelatine leaf
orange essence or squash
a saucepan and a flat dish
Method: Put the carrots in a pan and cook them gently in just enough water to keep them covered, for ten minutes. Add a little orange essence, or orange squash to flavour the carrot. Melt a leaf of gelatine and add it to the mixture. Cook the mixture again for a few minutes, stirring all the time. Spoon it into a flat dish and leave it to set in a cool place for several hours. When the "fudge" feels firm, cut it into chunks and get eating!

Children were even given carrot lollypops! 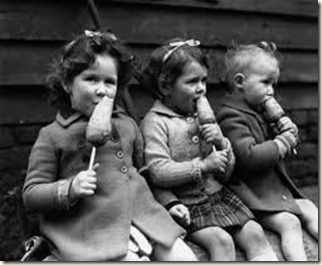 You can find more carrot recipes here, at the official UK carrot museum.  I kid you not!

The Ministry of Food encouraged so much extra production that by the start of 1942 they had a surplus of 100,000 tons of carrots. Much of this was offered to farmers for stock feeding at less than half the price guaranteed to the growers. These carrots were sprayed with a harmless purple dye before delivery to ensure they weren’t sold for human consumption (although do doubt they were).

I have been so inspired about the history of carrots during WWII that I used then in tonight's curry – much to the delight of my children, there was no broccoli to be seen!