The electric iron was available in 1913, and by the 1920s was the most popular electrical appliance in Australia.
Hand irons were used for garment pressing long before electricity, heated directly either by gas flame or stove plate heat.  In China metal pans filled with hot water were used for smoothing fabrics as early as the 1st century BC.
The people in North Europe used glass, wood and stones for smoothing clothes.   In the Middle Ages  blacksmiths began forging smoothing irons -   flat irons or sad irons (from an old word meaning solid)  - that were simply heated in a fire before use.


Later designs had an iron box which could be filled with hot coals, which had to be periodically aerated by attaching a bellows. In India, burning coconut shells were used instead of charcoal, as they have a similar heating capacity. Other box irons had heated metal inserts instead of hot coals.

Up to the middle of the 1800s, iron design was generally between the customer and the blacksmith, with only a couple of commercially available models.  In 1871 Mary Potts patented the Mrs. Potts Sad Iron, a hollow cast iron that could be filled with a material such as plaster of Paris, cement or clay, that Mrs. Potts claimed would hold the heat longer so that more garments could be ironed without reheating the iron.  The timber handle was detachable and remained cool to the touch.  She received a series of patents for variations on her iron and reissued others, and blitzed the competition with her advertising campaign, even using trading cards to advertise and spread the word of her product. 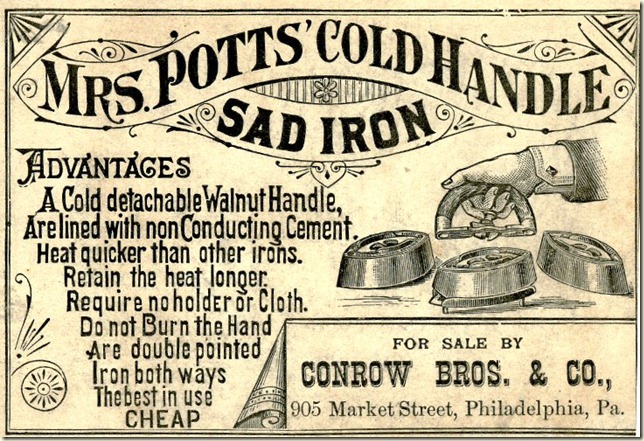 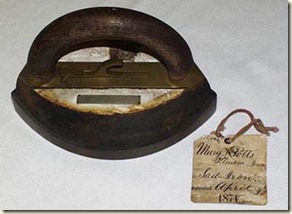 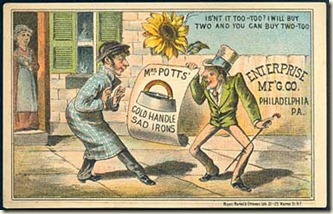 Most basic irons have been pointed at one end, or shield shape. The smoothly pointed shape makes it easier to get into tight spots and into cuffs, and for ironing of pleats, collars and small details.


In the 1800s, an era when everything had to be ironed, manufacturers produced irons for every trade and every category of clothing  -.   sleeve irons, hatter's irons, fluting irons (good for cuffs), dressmaker's irons, artificial flower making irons, billiard table irons, and irons for polishing, glossing  and crimping.

On June 6, 1882, Henry W. Seely of New York patented the electric flat-iron – it weighed a mammoth 6 kg (15 pounds) and took a long time to warm up. Other electric irons had also been invented, including one from France in 1882 but they used a carbon arc to heat the iron, which was not a safe method . In 1892 hand irons using electrical resistance were introduced by Crompton and Co. and the General Electric Company. These irons consisted of a base with an electric heating element, and the iron that you held – so electricity heated the iron instead of another fuel.   Later "irons" would have the heating elements built in to the hand-held tool, which would allow the iron to stay hot and not need reheating.  Funny how we have now returned to two piece irons – those with separate bases. Steam irons were not introduced until the early 1950s.


In 1913 I may have been able to get one of these "Tank in the Handle" Gas Irons, patented in 1913 and manufactured by the Acorn Brass Mfg. Co. of Chicago, Illinois.  I’m not sure how well it worked, or how safe it was,  but it has a great streamlined, modern rocket look.  Gas irons continued to be popular well into the 1930s, and were made until the 1980s, but there were a few brands of electric irons around in 1913, including General Electric and Landers, Frary and Clark.

There were even Ironing Machines – in electric or non-electric form.


It’s nice to know that if I did live in 1913, I could have been using an electric iron to iron my husbands shirts.  That is if I still lived in Melbourne.  Here in Mackay electricity was not connected until 1924! I love this painting – the little boy reminds me of my youngest son, and I can imagine that is me doing the ironing while he plays outside.


This photo is from an Amish homesteading blog I have just found. Erin Harrison and her girls use husband Marks Great Grandmother flat iron, that they heat of the stove. Erin makes even washing without electricity sound fun. 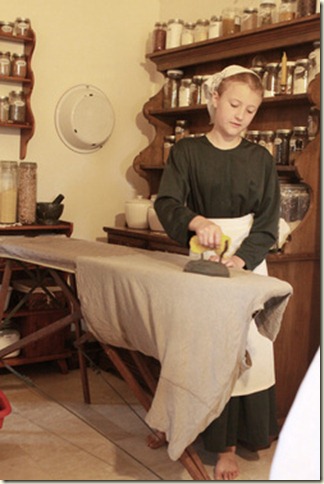 To finish, just because I think its beautiful, here is a Saunders Silver Streak iron from the 1940's.

During the WWII era when metal was in short supply (and when Pyrex cookware was becoming all the rage) the Saunders Machine and Tool Co. of New York utilized Pyrex glass bodies provided by the Corning Glass Co.  The entire top shell is Pyrex, with just the sole plate being chrome plated metal. They came in a range of colours including red, green, blue, silver and more.  Unfortunately the fragility of a glass iron made them a short lived and they were discontinued shortly after the war.  they are now a collectors item – expect to pay around $1,000 to $2,000! Even I would happily do the ironing if I had one of these.