In 1842, Morse had submerged a telegraph wire insulated with tarred hemp and India rubber, in the water of New York Harbour, and telegraphed through it, and the idea of a submarine line across the Atlantic Ocean began to be thought of as possible.

In the 1850's, a letter from London took 12 days to reach New York in the United States; 13 days to Alexandria in Egypt; 19 days to Constantinople in Ottoman Turkey; 33 days to Bombay in India; 44 days to Calcutta in Bengal; 45 days to Singapore; 57 days to Shanghai in China; and 73 days to Sydney in Australia. You can see we were a little behind the times in Australia!  So not only did we install telegraph line across the continent, but we wanted to link ourselves to the world by means of undersea cable.

Cyrus Field (1819-1892), in association with Peter Cooper and others, formed a company around 1854 to build a telegraph cable between Newfoundland and Ireland.  No one shop was large enough to hold all the cable needed, so The United States provided the U.S.N.S. Niagara and Great Britain the H.M.S. Agamemnon and loaded two ships with equal amounts of cable. They began their mission at a point midway between the continents, and sailed to the opposite shores.

On July 29, 1858, after four costly failures, the two ships returned to mid-ocean and spliced the lines together  for the last time. The Agamemnon sailed for Ireland and the Niagara was destined for Newfoundland, and on  August 5, 1858, each ship reached its destination.


The telegraph cable is a complete triumph. Messages are passing over its wires quite freely, and there is no doubt a short time will enable our electricians to increase the velocity of transmissions so as to bring it up to those already in use. It is needless to remind the public how few had faith in such a wonderful achievement a month ago.

The London Times referred to Field as “The Columbus of our time, who, after no less than forty voyages across the Atlantic in pursuit of the great aim of his life, had at length by his cable moored the New World close alongside the old.”

Sadly, the first cable didn't last long. After three weeks, it stopped working - the telegraph operators in their zest to communicate decided the answer to a weak signal was to use more power, so they fried the cable. By the time they laid the more permanent telegraph lines in the 1860s, operators had learned their lesson. The cable laying process also developed, and new machinery was invented to help the cable laying process.

Contemporary interest in the submarine cable was huge. Field, ever the entrepreneur, entered into a deal with Tiffany & Company of New York, who purchased twenty miles of cable that had actually been submerged and retrieved from the bottom of the ocean. They cut it into 4-inch sections, each banded at the ends with brass ferrules and had a brass plaque that read “ATLANTIC TELEGRAPH CABLE/GUARANTEED BY/TIFFANY & CO./ BROADWAY • NEW YORK • 1858.” 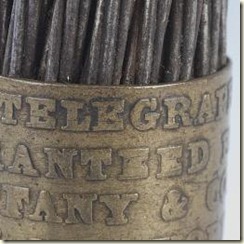 The cable souvenirs originally sold for 50 cents and came with a reproduced letter of authenticity from Field himself. There were also other souvenirs such as “paper-weights, cane, umbrella, and whip handles, bracelets, and watch-charms.

Here's the Tiffany's ad for the cable: 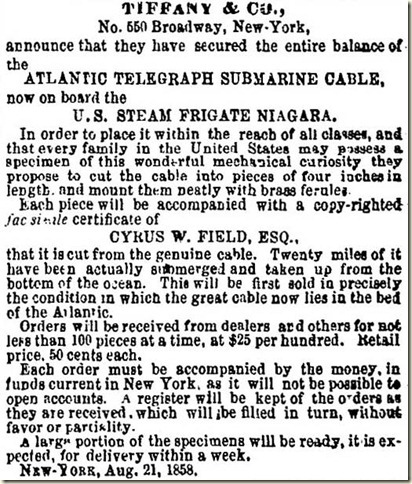 When the trans-Atlantic cable failed, sales of cable pieces stopped.  The remaining unsold pieces of cable were stored and forgotten. The New-York Historical Society has in its collection 930 pieces of Tiffany cable, still packed in the original crates for wholesale distribution.


Australia's overseas telegraph service was partly connected in the late 1860s, from London to Galle in Ceylon, where messages were taken by mail-boat to Adelaide in South Australia.  After the Overland Telegraph Line from Adelaide to Darwin was installed in 1872, a link to Bombay via Singapore and China was made, when the Eastern Extension, China and Australasia Telegraph Company (the Extension) was formed, a sister to the huge Eastern Telegraph Company, formed at the request of the British government by the amalgamation of four separate companies.


In 1876 the first Australia to New Zealand telegraph link was opened, and then one from Broome to Batavia (Jakarta) in 1889.Brisbane was linked to New Caledonia in 1891.   A further international link from Perth to the Cocos-Keeling Islands was installed in 1901, and in 1902 a telegraph cable across the Pacific between Canada and Australia (landing at Brisbane) via Fiji, New Zealand and Norfolk Island was completed. Another trans-pacific cable  linked the US mainland to Hawaii in 1902 and Guam to the Philippines in 1903.