The next, and last, group of moustaches are all very similar to me – the lampshade, painter’s brush, pyramidal and toothbrush – they just involve a little trimming at the sides, which is sometimes hard to see in photos.  Of course the toothbrush is more recognizable, it's quite thick and shaved to be about an inch wide.  The most famous toothbrush moustache is undoubtedly this one:

Around the same time were the comic duo of Laurel and Hardy,  one of the most popular  acts of the early Classical Hollywood era of American cinema. Composed of thin Englishman Stan Laurel (1890–1965) and large American Oliver Hardy (1892–1957), they became well known during the late 1920s to the mid-1940s for their slapstick comedy, with Laurel playing the clumsy and childlike friend of the pompous Hardy, who sported a toothbrush moustache.
Before Hardy, of course, there was Charlie Chaplin. Although often referred to as a toothbrush moustache, his was actually more pyramidal:

His moustache and 'Little Tramp" persona made him more recognisable and shot him to fame, but Chaplin was undoubtedly good looking without it.

Can you imagine Hitler with his moustache?

During WWI Hilter actually had  a much larger moustache.  According to a soldier who served alongside Hitler in the trenches, he was instructed to trim his moustache so that it would fit under the respirator masks introduced in response to British mustard gas attacks.

Neither the toothbrush or pyramidal styles seem all that popular at present, probably because they are just so identifiable with the  men above, although here is a photo of George Clooney in the movie 'Men who stare at Goats" (2009) with a pyramidal moustache. 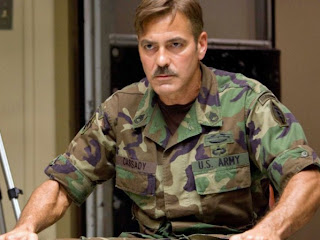 The 'Painter’s brush' is a thick moustache covering the width of the mouth, usually worn short, with slightly rounded corners, and looks a bit like a short Chevron.  Here's a photo of a young Robert Deniro sporting a paintbrush moustache.
And George Orwell, with almost a straight edged paintbrush.

The Lampshade moustache is  similar to the “painter’s brush,” but with corners angled slightly, resembling the shape of a lampshade, and is very hard to find examples of, so excuse me!  The Pencil moustache, however, is a different story.  This thin, narrow, closely clipped moustache outlines the upper lip and is also sometimes called a “mouth-brow.”  It was very popular in the 1920s and 30s.  Here are some examples:

You could also call the above moustache an 'English', with the gap in the middle.

The last moustache style is the Walrus, which lives up to its name - a large, bushy, droopy moustache that hangs down over the lips, often entirely covering the mouth.  Very hard to kiss, I would imagine.....

So there you have it, the short guide to moustaches.  Of course there are many more, and new styles seem to be invented everyday - just look at the 'Batstache'.  I think my husband is going towards the paintbrush, but maybe a Chevron if he keeps growing it.  He is a little to shy to appear on my blog, but you can check out his Movember page here.

Enjoy the last few days of Movember everyone!