On 17 February 1942 there was a Japanese  reconnaissance flight over Sydney Harbour by “the Glen”, a float plane that could be dismantled and stored at the front of a submarine.

Despite the brownout in Sydney at the time, the Japanese were able to see the lights at the Garden Island Naval base and at dawn count 23 ships in Sydney harbour, including five submarines and three military ships.  They did take a while to find their own submarine, however, but did finally locate it off the north coast before landing and being stowed safely aboard.  ‘The Glen” would attempt a similar flight over Melbourne later in the month, before the Japanese attacked Sydney Harbour in late May and early June 1942.

Also in this day, most of the Australians captured in Singapore were moved into Changi prison.

And I feel like I’ve had a hard day!  I have been in the office myself all day, as my boss and sweetie has gone on a conference to the big smoke (The Gold Coast – really hard work!) 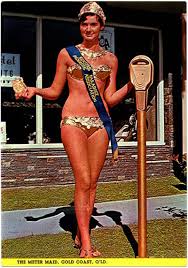 Yes, gold bikini clad meter maids.  They still have them. But seeing every photo of meter maids now looks like something out of Playboy Magazine, I can’t possibly show you one.  I much prefer this look – Betty Grable in 1942’s Song of the Islands.