It was a very busy Sunday.

I decided it was the day to work on the kitchen/dining area.  It’s very small for a family of seven, but we are used to it after ten years.  I just wanted to brighten it up a bit and tie it it with the lounge and the black and white gingham and red (see previous posts).

We panelled the wall next to the dining table with pine tongue and groove boards.  I was sick of the chairs hitting the wall and leaving black marks, so I thought a chair rail in a dark colour would be a good idea.  Then I stuck vinyl check tiles to the floor, instead of a rug for under the table, as the scratched timber floor is really ugly (and the cost and mess of refinishing will be borne down the track). 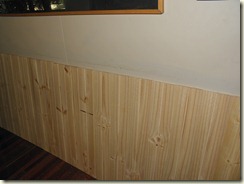 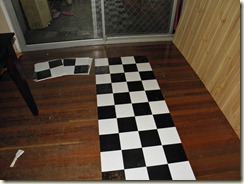 Stick on vinyl is so easy – I was going to use sheet vinyl, but we couldn’t find it in the right pattern.  I am definitely going to use this when I budget makeover the bathrooms (and the kids really want it in their room as a giant chess board).

I recovered the chairs with cherry print fabric, and the two chairs the little kids sit on have a red, plastic covered fabric.   I just unscrewed the seat, stretched the fabric over the existing covers and used a staple gun to attach, and then reattached the seaats. 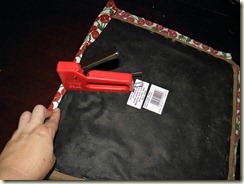 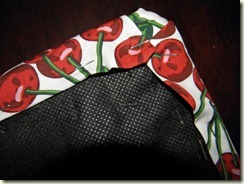 Then I painted the walls in an off white, instead of the darker beige they were, and added a black gloss chair rail (which I painted before attaching).  Now the chairs hit the rail instead of the wall! 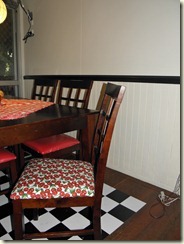 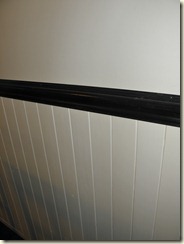 I plan to frame vintage ads in black frames for on the wall.  Some of the ads I have ordered on ebay, and others are from my existing magazine collection.  While I am waiting for the ebay ads to arrive from the US, I am collecting old frames and painting them with the same black gloss as the chair  rail. 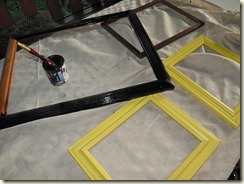 If  you try this at home, wear gloves, as black oil based paint covers wonderfully, but is very messy.  And don’t try and prise the glass out with your fingers - I have a large cut on my thumb now!

I shall post an update when I finish, and take some better photos.

And the days news:

The Battle of Pasir Panjang, which took place between 13 and 14 February 1942, was part of the final stage of the Japanese invasion of Singapore.  After a a bad day of shelling and bombing, the guns were silent, before the unconditional surrender by General Percival (Allied commander of Malaya) to the Japanese early Monday morning. 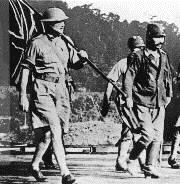 General Percival on way to surrender

In Australia, two RAAF Wirraways, collided near Cleveland (Brisbane) during a practice of air fighting tactics. Debris from the two aircraft fell over the local school and cemetery and onto the shores of Moreton Bay and four airmen were killed. 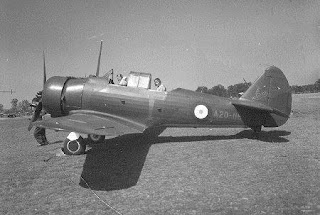 Saying a prayer to them all,

Email ThisBlogThis!Share to TwitterShare to FacebookShare to Pinterest
Labels: 1940s, decorating, My Home