From a vintage point of view, I have been posting backwards. I have looked recently at irons and ironing, but of course washing has to come first!  One hundred years ago the weekly chore list would have been something like this:

I would love to stick to a schedule like this, but I would need to buy the children more school shirts - I also need to sweep every day, a downside of living near the beach. In the late 1800s and early 1900s laundry was the housewife's most dreaded chore – really, I mean, a whole day of washing - clothes, sheets, cloth, all by hand. And many women had big families - I have five children and can't imagine washing all their clothes by hand.  No wonder they called it Blue Monday. 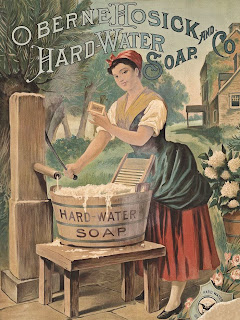 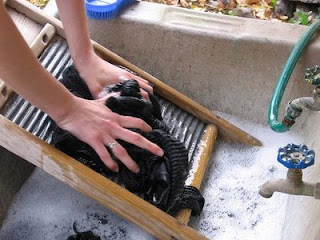 Underwear was  washed frequently of course, but thick top clothes tended have to last with just dirty spots being sponged off – that's why aprons and smocks were popular to keep clothes clean. How people managed here in Mackay and other tropical climates I don't know.   Often just one sheet from each bed was washed weekly - last week's top sheet became this week's bottom sheet.  Wool blankets were washed once or twice a year in good drying weather, as were woollen garments. Often the washing would be taken in still damp and rolled up on a Monday evening, and then ironed the next day. I do try and get the shirts in from the line still damp as it really does make them much easier to iron.

So even one hundred years ago women knew they had to do laundry, not just because of pride and wanting their families to look nice and fit in, but because of hygiene.  The ordinary person may not have known about germs and bacteria, but they knew enough to know that boiling the water for washing was a good idea.  Mum still talks about how clean clothes got in the old copper she used when first married in the 1960s. The copper was like a deep metal bucket with a lid, built into the corner of the laundry room, or outside, with a space underneath for the fire. (For a great look at washing in a copper, head to 1900s.org.). You would move some water from the copper into a tub for the dark washing, and then boil the' whites', usually sheets and underwear and shirts, in the copper, while stirring.  The darks clothes in the warm water would be scrubbed, by hand, and sometimes on a washboard. Then more water was added to rinse in.  Sounds fun don't you think! I remember helping mum ring out the clothes by hand, before pegging on the line, and I always got my own little tub to wash my dolls clothes in, or sometimes the socks, which made me fell really grown-up!


With early washing machines, the water still had to be heated in the copper or on a stove, after being hauled in from the pump or sink, and poured into the machine. To force water through clothes there was a wooden dolly, basically a stick with prongs, which you moved back and forth and up and down, or some sort of metal grate, like a washboard, that you could move with a leaver. A wringer or mangle with two rollers, mounted on top or next to the washing machine, squeezed excess moisture out of clothes as they were fed through. 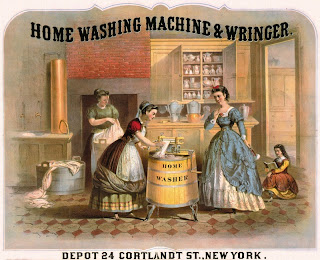 Although the first English patent under the category of Washing and Wringing Machines was issued in 1691, the "compound rotary washing machine, with rollers for wringing or mangling” was not patented until 1862, when it was shown at the 1862 London Exhibition. The first United States Patent titled "Clothes Washing" was granted in 1797 and in 1843 a Canadian inventor patented a "Clothes Washer With Wringer Rolls."  John S. Lash of Pennsylvania also patented a wringing and washing machine in 1862. The machine was modified by Gunn & Amidon, who put their own patented wringer on it, and marketed the result as “The Washing-ton Machine.” Advertised as the “cheapest, simplest and most perfect machine in the world,” much was made of the fact that the unit’s Amidon wringer operated without the use of cog wheels and could be trusted to be gentle on clothing.

At the 1876 Centennial International Exhibition in Philadelphia Margaret Colvin exhibited her Triumph Rotary Washer that she had patented in 1871.  Her husband made and marketed the machines, and by all accounts they were quite useful, unlike many designs of the time.  Between 1862 and 1894 at least 48 American women patented washing machines or related items such as wringers, drainers and strainers, and at least 2,000 patents had been issued in the USA alone.

In Australia in about 1879 an unusual washing machine marketed as the "Compressed Air" model was made in Melbourne by Echberg, Wolter & Co. Dirty clothes, soaked in hot water, soap and washing soda (sodium carbonate), were placed in the "torpedo-shaped" tub which pivoted on a stand. The lid was sealed and by rocking the tub for about five minutes the washing was said to have been completed. I have seem a modern rotating compost bin that is similar too. 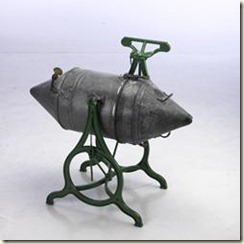 
From about 1904, the job of moving the dolly could be done an electric motor placed beneath the tub, or a gas powered engine, but you still had to heat the water separately.  The first electric-powered washing machine is said to be the drum shaped  “ Thor”, introduced in 1908, by the Hurley Machine Company of Chicago, Illinois and invented by Alva J. Fisher.  However there was mention of electric machines in newspapers a few years earlier.  The mangle could also be powered by electricity, which was a little dangerous, especially for little fingers.


Thor was so successful that by 1920 there were in excess of 700 American companies producing washing machines, including Maytag, Bendix and Whirlpool. 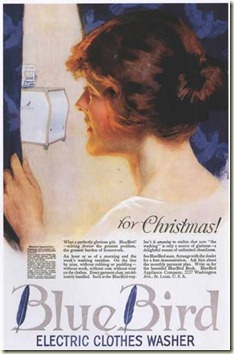 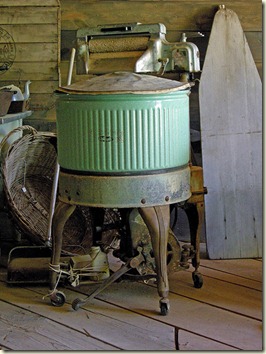 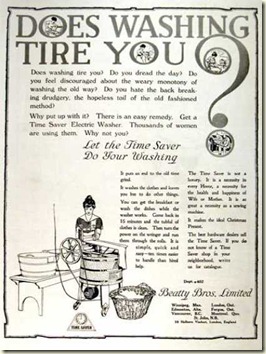 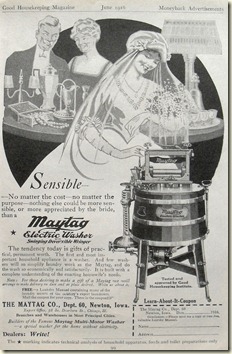 In 1928 there were 913,000 electric washing machines sold in the United states. During the 1930s washing machine design greatly improved, and more attention was paid to electrical and mechanical safety. Spin dryers were introduced to replace the dangerous power wringers of the day, although not all machines had them. 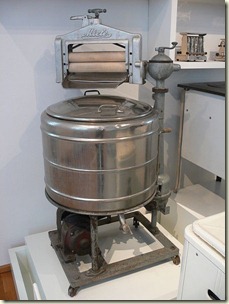 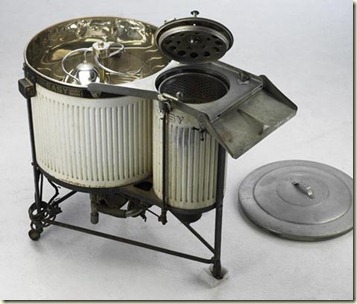 Twin-tub washing machines also represented a major advance in washing-machine design -  One tub is the agitator tub and the smaller tub acted to rinse and spin the clothes.  The Syracuse 'Easy' , above, featured vacuum-cup technology, which helped force soapy water through clothes. I remember that one of my grandmothers used a hand powered wringer with her electric washing machine, and my other grandmother preferred her old twin-tub model, which you had to fill with a hose.  Even in the 1980's they would never let us get them a modern machine.

In 1937 the Bendix Corporation introduced the first automatic washing machine in 1937, a front loader, with spin dryer. It had to be anchored to the floor to prevent "walking" as it lacked drum suspension, but wow! what an advance.

Even into the 1940s most people were using top loading tub type washers such as this one.

While this machine still required lots of attention from the woman, it required much less manual exertion, so that instead of a whole day to do your laundry, you could have it done by mid-day, leaving you "fresh"  - now you might have the energy to also do the ironing on Monday’s as well. These machines were much cheaper than the fully automatic washers, but even so many couldn’t afford even one of those.  $39.95 seems cheap now, but in the 1940s the average wage was under $2000 a year. So now we have automatic washing machines that do the hard manual labour for us, and we spend money on going to the gym instead - some crazy world. 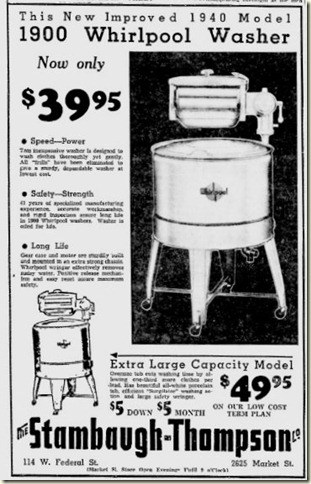 Most women in Australia had to wait until the 1950s for their first electric washing machine, when there was greater prosperity and the ready availability of electricity (and water). If you want to cut down your greenhouse emissions, go vintage!  As for electric clothes dryers – well -my mother still doesn't’ have one! And they were invented in 1915.  Washing detergent though, that’s another story…..

Enjoy your washday Monday! And as usual, lots more washday images on tumblr.