Clothes make-eth the man……. he knows he looks good!

And these guys are “going places”.

Clothes also make-eth the woman, according to Harry Langdon in this short fashion show movie from 1942. 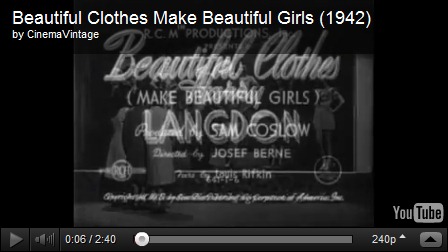 To news - On this day in 1942 the first of Hitler's raids against historic British towns took place in Exeter, with 25 bombers causing widespread damage and 70 deaths.  The raids were reprisals for a  234 bomber raid against the Baltic port of Lübeck on 28 March, in which high explosives and incendiaries were dropped on Lübeck's Old Town, largely composed of wooden buildings. The bombing and the subsequent fires caused 1,000 deaths and massive destruction. Burning Lübeck Cathedral after an air raid in 1942 Have a lovely day.