Never Smile at a (Vintage) Crocodile

Living in north Queensland, we are used to crocodiles.  Here, for instance, is the sign at our local beach, just a block away from our house. 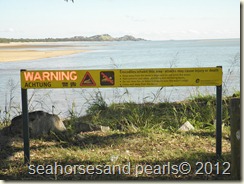 Cheery, no? And these are salt water crocs, big scary things usually 3 to 5m long, that often take a dog or bird from along the shore.  Australia has fresh water crocs too, which are much smaller and tend to eat only fish.  I last saw some in the badly named East Alligator River in the Northern Territory.  Australia even has crocodile farms – there is one just four hours south of me at Rockhampton.  Most Crocodile farms in Australia have been operating since the 1980s, but Hartley’s near Cairns in far north Queensland began in the mid 1930s, starting as a rest stop and kiosk and gradually adding a crocodile show and zoo.

Crocodiles and alligators also featured in circuses at the turn of the century.

Although crocodiles are big attractions now in Australia, in the past Aussie croc farms never seemed to go into the whole tourist thing very much  - not like the Americans . For instance, I haven’t found any Australian photos or postcards like this:


I mean really, would you let your child do this?!


Obviously they did at the LA Alligator farm at the turn of the century.  Alligators must have been a real statement – in these next photos the alligator is at least stuffed.
Mind you things haven't’ really changed that much in America it seems, as a quick visit to youtube will show. And there also seems to have been a craze for grown women sitting on alligators.

Or even trying to brush their teeth.

Personally I like my crocodiles like this, and being vintage I don’t feel so guilty – it’s really preservation to buy these!: