Today another look at Australian history in the 1930s, and a bit about General Motors, who took over Australia's Holden Company in 1931.


General Motors was founded in Michigan in 1908, in Flint, Michigan, as a holding company for Buick who sold his company to  the Durant-Dort Carriage Company.  Established in business in 1886, by 1900 Durant-Dort was producing over 100,000 carriages a year in factories located in Michigan and Canada.  Durant already owned several Ford dealerships, and soon acquired Oldsmobile, Cadillac, Cartercar, Elmore, Ewing, and Oakland (later known as Pontiac), as well as several truck companies. 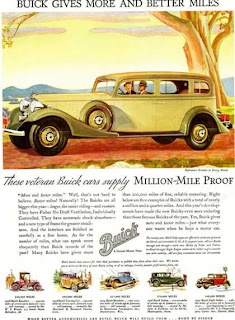 Durant lost control of GM in 1910 to a bankers trust when a deal to buy Ford fell through, so he left the firm and co-found the Chevrolet Motor Company in 1911 with Louis Chevrolet.  In 1916  Chevrolet bought 54.5% of GM with the backing of Pierre S. du Pont, and later that year the GM Company became incorporated as General Motors Corporation. 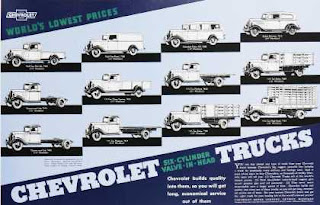 GM's headquarters were located in Michigin until the mid-1920s when it was moved to Detroit in 1923, when "the Durant Building" was completed in 1923. New president Alfred P. Sloan renamed the building 'Cadillac Place', and it remained their headquarters until 1996.

GM surpassed Ford Motor Company in sales in the late 1920s thanks to the leadership of  Sloan, who invented new ways of managing a complex worldwide organization, while paying special attention to consumer demands such as style, power, and prestige.  Safety wasn't a huge concern though it seems - when it was proposed Chevrolet should introduce safety glass, he opposed it because it threatened profits.  GM also introduced monthly payment plans that allowed more people to buy GM cars - Henry Ford was opposed to credit on moral principles.

In 1925, GM bought Vauxhall of England, and then in 1929 went on to acquire an 80% stake in German automobile manufacturer Opel. Two years later this was increased to 100%. In 1931, due to financial difficulties, Australia's most successful company of the 1920s, Holden's Motor Bodies Ltd was forced to merge with GM, who were able to acquire the Holden company at a 36% discount - a total sum of 1,750,000 pounds. What a great buy!  GM company directors stated that with a fall in national income of 140 million pounds, it would be some years before the automobile business in Australia recovered and shareholders saw a profit.

"The closure of Holden's Australian operations is one option being considered by US parent company General Motors"
and indeed they did close some factories and have proposed more closures.  Times haven't really changed, have they?

Because of the huge fall in national income, in January 1931, the Commonwealth Arbitration Court reduced all wages within it's jurisdiction -  that is basically the whole of Australia's workforce.  The idea was that a reduction in wages would increase employment.  Because of the severe economic contraction, and the reduction of purchasing goods, employers still couldn't afford to keep excessive workers. A five-year unemployment average for 1930-34 was 23.4%, with a peak of approximately 30% of the nation being unemployed in 1932. This was one of the most severe unemployment rates in the industrialised world, exceeded only by Germany.  The majority of the people of Australia lived very well during the 1920s, so they felt the effects of the depression strongly.

The basic wage was restored in April 1934, although it was based on a lower wage that before, and the trade unions were not happy.


In 1934 Larry Hartnett (later Sir Laurence Hartnett) was sent to Australia by GM as Managing Director of the Australian company with a directive to either make it profitable or close it down.  By 1935 the world economy had strengthened and Hartnett lifted production to 23,129 bodies and a profit of 650,000 pounds. The company also introduced the "Sloper" to the world which was the fore runner of the hatchback and led the rest of the world in producing the first all steel bodies. In 1936 the company moved to new headquarters, at Fishermens Bend, Melbourne.

In 1936 Hartnett began planning the complete production of a "wholly Australian car", however another World War intervened, with the (Menzies) government of the time putting these plans on hold. Instead they were the first Australian company to mass-produce internal combustion engines including Gypsy Major aeroplane, Gray Marine, and a 4-cylinder radial torpedo. After the war the, Holden returned to producing vehicle bodies, this time for Buick, Chevrolet, Pontiac and Vauxhall. The Government also asked for proposals from any local company for production of a complete car - and General Motors Holdens were the only company to reply.  In 1948, after many difficulties, including GM wanting the design done in America, the 48-215 Holden (or FX Holden, as it soon became known) was born. 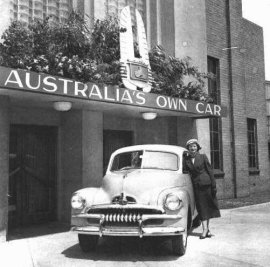 An Australian-made car so captured the imagination that 18,000 people ordered one without knowing any details about it - the waiting list was two years long.  The car weighed about 1000 kilograms, could cruise at 100km/h and would do about 130km/h flat out. It could travel 48 kilometres on a gallon (4.55 litres) of fuel (about 9.5 litres per 100 kilometres) and seat six people. And it was powered by a straight-six engine and could out-accelerate anything.

GMH also released the coupe-utility, now Australia's iconic car (although it was said to be invented back in the early 1930s by a young Ford Australia designer named Lew Bandt). You can read more about the ute here. 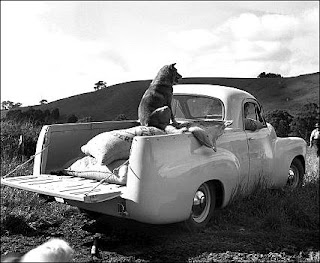 During the 1950s, Holden dominated the Australian car market. Ford Falcons went on to become some of the best-selling models ever and gave the Holden opposition terrible grief in the 1970s and '80s, as did Crysler. Large family cars are now being phased out - SUVs and small cars are more popular (we have one of each in our family, and not a Holden in sight.)  Both Ford and GM have made it clear that any future large cars will be global vehicles, not made-for-Australia specials.  Sadly, the end of the all-Australian car has come.