Animal Crackers is with out a doubt the craziest movie I have ever seen.  But I loved it, and so did my eight year olds. 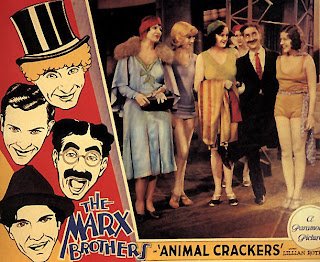 Four of the five Marx brothers feature in the film, made in 1930 and based on a successful Broadway play.  It was also the last film they made in New York. The basic plot is simple, a valuable painting goes missing during a party at a socialites house, in honour of famed African explorer Captain Spaulding.


Groucho plays the infamous Captain Jeffrey Spaulding, accompanied by Zeppo as his field secretary, Horatio Jamison.  The socialite, Mrs. Rittenhouse (Margaret Dumont) has her friend Roscoe W. Chandler (Louis Sorin) display a painting in honour of  Spaulding's visit.  Mrs. Rittenhouse's daughter Arabella (Lillian Roth), and another guest at the party have made copies of this painting and want their copies displayed in place of the original - the daughter to prove her boyfriend artist worthy, and the other just to be bitchy.
Harpo plays The Professor (of what is never explained, but he's very good at chasing women), and Chico is Signor Emanuel Ravelli.  Along with one liners, visual gags and longer sketches there are musical numbers, including Harpo on the harp, Chico on the piano, romantic numbers and songs by Groucho. The scene when the whole cast sings when Spaulding arrives actually reminds me of the Wizard of Oz - the scene in the Emerald City when they all arrive.

The film was both a critical and commercial success upon initial release, and remains one of the Marx Brothers' most beloved and often-quoted movies. My son is still quoting these two:
"Ever since I met you, I've swept you off my feet."
and
"There's one thing I've always wanted to do before I quit: Retire."

The kids favourite scenes are the cards scene with Chico, Harpo and two ladies, and the Chico-Harpo scene in which Chico keeps asking Harpo for "a flash" (meaning a flashlight), and Harpo—not understanding—produces from his bottomless trench-coat and baggy pants a fish, a flask, a flute, a "flit", a "flush", etc.

Myself, I just loved the fashions - there are lots of them.  Day dresses, skirts, suits, riding/explorer wear, swimwear, beachwear, lounging pyjamas and evening dresses - everything you could hope for.  It's worth watching just for the fashion.

I have tried to upload this video on to YouTube - my first attempt. Of course it's not working, so here is the link to part 1.