In 1931 Coco Chanel travelled to California for Samuel Goldwyn and a one million dollar contract, where she designed  some of the most beautiful outfits and gowns in Hollywood - for Gloria Swanson, in “Tonight or Never,” (1931) and for Ina Claire in “The Greeks Had A Word for Them,” (1932). She had come late into the production of Eddie Cantor’s Palmy Days (1931), and created only a few garments for the film. The the public loved her dresses and several celebrities become private clients, but she did not like Hollywood, "the capitol of bad taste" as she called it.  Some say her dresses weren't sensational enough, and that is why Goldwyn let her go.  I imagine this design from 1932 was inspired by her time in Hollywood. Pretty sensational wouldn't you say! 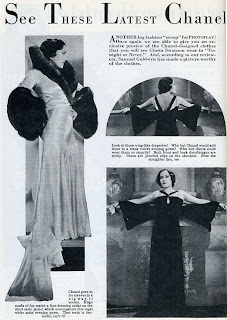 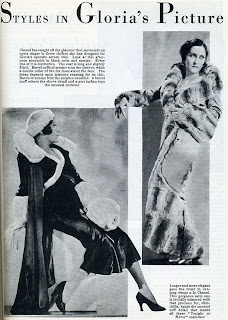 A Photoplay magazine article about Chanel’s gowns for Tonight or Never, January 1932

Chanel also designed a collection of diamond jewellery in 1932.  She had already built a business based on costume jewellery, and the men of International Diamond Guild hoped that her flair could revitalising the diamond industry, which had been slow since the crash of 1929. The star of her collection, pardon the pun, was no doubt this:

The necklace, inspired by a comet, has a five-point star and round-cut diamonds that wrapped around the throat, finishing in a splashy tail.  Chanel told to one journalist how she glanced up at the sky one night while strolling the Champs-Élysées, contemplating how she would imbue fine jewellery with her singular aesthetic, and she found her answer among the stars: “I wanted to cover women in constellations,” she said. 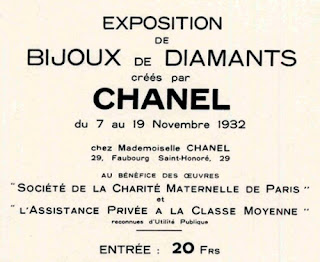 Bijoux de Diamants was the first high-jewellery collection for Chanel — and the only for Coco — and in celebration of its 80th anniversary, last year the couture house is reinvented the series with “1932,” a new variation on the classic jewels originally designed by Mademoiselle Chanel. with 80 specially designed pieces. You can see the collection here. Doesn't hurt to look!