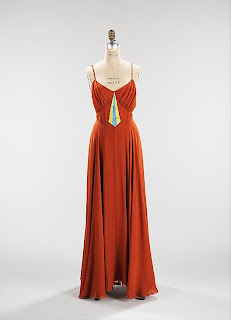 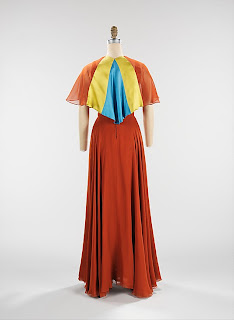 Elizabeth Hawes created simple, witty, distinctive, elegant and practical garments for women of means that were so smart and timeless that they were as contemporary in the early 1930s as they were in the late 1940s, and could even be worn now.

Hawes' had made clothes and hats for her dolls, before beginning to sew her own clothes aged 10.  She is a great ad for a Montessori education, which her mother insisted on, teaching her children various handicrafts and well as reading and writing. At age 12 she began dressmaking professionally by making clothes for the young children of her mother's friends, and selling some to a local shop. She stopped this when she went to high school, but  continued making her own clothes.

Although she studied economics, at Vassar she designed costumes for the annual outdoor play, and in her free time focused on clothing. At the end of her sophomore year in 1923, she went on a six-week course at Parson's School of Fine and Applied Arts, and deciding she needed more useful experience, secured an unpaid apprenticeship in the Bergdorf Goodman workrooms in the summer of 1924, to learn how clothes were made to order.  Intrigued by the imported French fashion in the store, she decided  to travel to France to find out what fashion was all about, and began dressmaking to raise funds for her travel, selling clothes to her classmates and through a dress shop on campus.  She prepared to set sail for Paris in July 1925, securing two contracts to report back fashion news from Paris, earning her another $25 per month. That economic course really paid off!

Once in France her first job was in a shop that sold copies of Chanel and Vionett, but she soon sickened of that.  She was offered a job with Paris Vogue in 1928, but when she explained her ambition of sesigning her own line the editor secured her a job with Nicole Groult, the sister of Paul Poiret, where she was able to design and develop her own method of designing based upon Vionnet's technique of draping on a mannequin.

In 1928 Hawes returned to New York and presented her first collection on December 16, 1928, her 25th birthday.  On July 4, 1931, she presented her collection in Paris, the first from a non-French design house.  In 1932  Hawes was featured in two shows of American fashion designers at Lord & Taylor, which led to a flood of newspaper and magazine articles on American fashion designers and the beginning of 'An American Style.'

Hawes was an outspoken champion of dress reform and encouraged women to wear trousers, and men  to wear robes, coloured clothing, and soft garments if they wished.  She firmly believed there was a difference between fashion and style. Style, she declared, “is dressing to fit your own self – it lasts.”  She also wanted to create moderately-priced designs that brought high fashion design to the ready-to-wear customer.   She tried this in 1933, but stopped when she found our that her designs were being made from inferior materials.

In 1935, she showed her designs in Moscow, the first display of haute couture there since the Russian Revolution of 1917, but she told the Russian women that they should not attempt to copy the fashions of any other land. "They are big women, strongly built., and they should have their own styles. They are beginning to develop their own mode of dress best suited to themselves. As far as that is concerned, I believe it is a mistake for any country to adopt the styles of another."

She also designed costumes for Broadway plays, and for men, and in 1938 published 'Fashion Is Spinach', an autobiographical critique and exposé of the fashion industry (which is available on my fashion page).  The title came from a Carl Rose cartoon published in the New Yorker on December 8, 1928. While attacking the pretense of fashion, she still managed to produce popular designs, which some thought was contradictory, but showed what she believed to be the only useful purpose of fashion  -  to entertain, "to give a little additional gaiety to life". 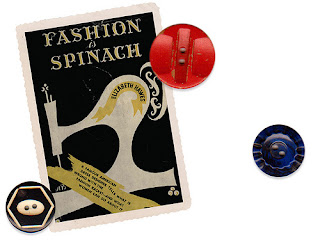 During WWII she changed her mind a little - gaiety was needed even more.  “It is not very difficult for a designer to understand the motives of wearing clothes for physical protection. The hard thing is to grasp how important it is to many people to get psychological protection from their clothes.” She was speaking of uniforms, mainly for women, and the women on the homefront staying cheery and being strong by keeping up appearances - hence the whole make do and mend campaign and how to refashion clothes to stay in fashion.

For more of her work go here. Or go to tumblr.