Today is my husband Peter's birthday, and if I had the money, I would buy him one of these.

Or possibly a new 407 - he has a ten year old model at present, which he loves. Lots.  Although I would prefer one of these myself.

Isn't it stunning?! The 601 was Peugeot’s largest and most expensive car at the time, with a 2148cc six and the world’s first retractable hardtop. Designer Georges Paulin came up with the idea, and coach builder Pourtout built it. Paulin was not a professional designer, but actually a dentist, whose passion for cars had led him to develop a retractable metal roof mechanism.  Initially Peugeot considered it too complicated, so Paulin and Pourtout purchased some bare chassis and constructed the cars, christened “Eclipse,” on their own. It was so popular that Peugeot acquired the patents in 1935.

Peugeot is now part of PSA Peugeot Citroën, but the original family business of Peugeot was founded in 1810, manufacturing coffee mills and bicycles. Emile Peugeot applied for the lion trademark in 1858, and in 1889 the firm showed its first passenger car - a Serpollet-powered steamer (basically a steam powered tricycyle) - at the "universal exposition" held in Paris. 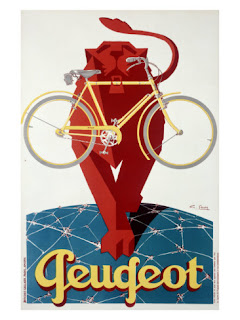 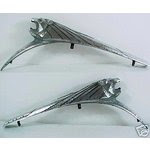 In 1890 came a Type 2 Peugeot, this time with an internal-combustion engine built in France under license from Gottlieb Daimler. The Peugeot company and family is originally from Sochaux, France, and they still have a large manufacturing plant and  Museum there.
Since 1930, Peugeot had begun labeling its models the 201, 301, 401, and 601. When the new 1935 Peugeot 402 was introduced at the Paris Auto Show in the Grand Palais, it was recognized that the '2' represented the beginning of a quite different generation of passenger cars.

The 402 front end became the signature of the 1930’s Peugeot, and the car’s streamlined styling earned it the nickname “fuseau Sochaux” or, the “Sochaux rocket”.  I love the unusual, side-by-side headlamps positioned behind the sloping grille - but I do wonder if it impeded the light it sent out.

Peugeot’s used the traditional “body on frame” construction, with three different chassis lengths, that made it possible to offer 16 different body types.  Other options included recessed “safety” door handles, automatic transmission and a diesel engine. The art deco influence was obvious in 402, but if the standard sedan was radical, the 402 Cabriolet was an ultra-modern - almost futuristic - realization. Look at the curves on this compared to the 1934 model above.

Of course then they also brought out a 202.


Peugeot stopped producing cabriolets and convertibles with the outbreak of war in 1939, but did produce light commercial van and utility variants of the 402 during World War II.

(This year you'll just have to make do with some pictures, honey. Happy Birthday!)