This U-shaped, split level home was designed in 1961 for a sloping site, with three separate wings - the living areas in the lower wing, the bedrooms at the higher end of the slope, and the utility wing long the side.


The car-port indicates that the bedrooms are closer to the road than the living areas. 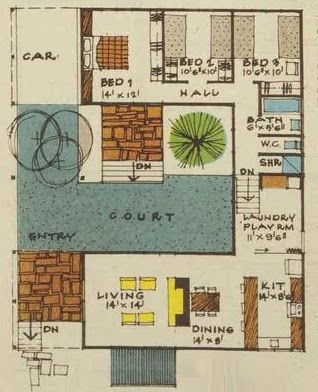 I quite like this plan - especially the fact that there are no wasted long hallway spaces.  I do think an additional car port next to the kitchen, with entry through the laundry/playroom would make unloading the groceries easier than parking near the bedrooms.  Back in 1961 the family probably only had one car, used by the man of the house to get to work, and the lady at home would have walked to the shops.