Last time I looked at ladies fashions it was those of the late 1890s, and in particular riding habits and cycling outfits.  The ‘Health’ corset had been introduced, and the S-curve was in.

By the early 1900's the fashionable silhouette was again hourglass, but subtly so, with a full low chest and curvy hips. Blouses, or shirt waists,  had high boned collars and waists were narrow and accented by a belt or sash. Skirts were still long, sometimes with a train, and often cut in five, seven, nine or even eleven gores with fullness at the bottom, even for day wear. 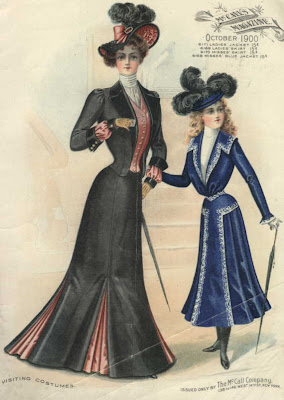 Although Worth, the famous English Parisian courtier, had died in 1895, he had already revolutionized dressmaking and introduced the concept of a fashion designer (he was the first designer to have his label sewn into his creations), and the early 1900s marked the coming of age of Parisian haute couture or high fashion.  Women of all classes, and countries, looked towards Paris for their fashion inspiration, and models wearing the designer’s latest creations were seen at the races and about town, and were photographed for magazines, such as Vogue (founded 1892) and newspapers.
The dominance of the Parisian fashion houses was led by The house of Jacques Doucet (founded in 1871), Rouff (founded 1884), Jeanne Paquin (founded in 1891; she trained at Rouff and was the first woman to open her own fashion house), the Callot Soeurs (founded 1895 and operated by four sisters), Paul Poiret (founded in 1903) and Madeleine Chéruit (founded 1906).   Madeleine Vionnet was working in Paris during this time for Doucet (she founded her own business in 1912).

"We have done all we can," say the Paris dressmakers, "to make a decided change in the fashions this Autumn. Those who wish to be strictly d la mode must give away their last year's clothes; those who are less particular can find ways of arranging their old dresses without appearing ridiculous."
- Mrs John van Vorst, Dress and Gossip in Paris, The Delineator  Magazine,1900

Ladies wore shirt like blouses, or shirtwaists, with a high collar and buttons, for informal day wear and it became the uniform of working women together with wool or tweed suits, known as Tailor mades because of the tailor fabric used.  The suit below left shows a seven gored skirt that flares at the foot with a close-fitting double breasted Eton jacket with a Robespierre collar and  turn-back cuffs, while the suit on the right has a modified jackets, known as the Eton Sans Revers, that is able to be worn open. 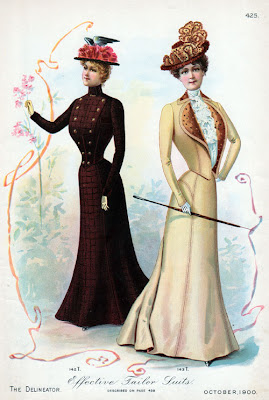 While women found the suit a useful all purpose outfit, some men objected,  as they saw it representing a challenge to their authority, particularly in England, where in 1900 women still did not have the right to vote, as did their sisters in Australia and new Zealand.

As in the previous decade, clothes worn around the house informally, such as tea gowns, were looser and less restrictive, and could be worn without a corset.
Hats were popular for both day and evening wear, with wider brims for day time wear, and were often quite large and trimmed with ostrich feathers and ribbon. 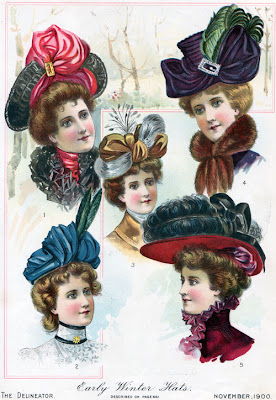 Queen Victoria's husband, Albert, had died of typhoid in 1861 (co-incidentally the year of the first Melbourne cup which is being run today) and she wore mourning clothes for the rest of her life.  This morbid outlook somewhat affected the Victorian fashions, as women in mourning were expected to wear black, and a full veil when leaving their home, for a full year after the death of their spouse.  Many people also dressed their staff in mourning clothes for the year.  Mourning crape was made specially for these clothes, and whole industries relied on mourning wear for their survival.

The Queen herself would die in January  1901, ending the Victorian era, but causing a brief upsurge in mourning garb.

Now, I am off to Melbourne Cup celebrations!  I have put lots of cup photos, fashion and info on tumblr, if you're interested.