During 1942 food shortages began to have an impact on the Australian home front. The agricultural industry was struggling with massive labour shortages, a severe and prolonged drought, and major shortfalls in imports of seed stock and fertiliser. There was a growing realisation that unless agriculture became a focus of the war effort, food shortages would be imminent. 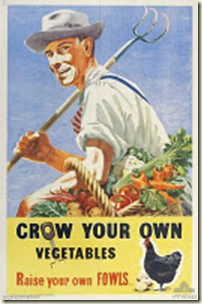 In January 1942 the Prime Minister, John Curtin, launched “Dig for Victory”, a publicity campaign urging householders throughout Australia to grow their own vegetables as a contribution to the war effort. Personal identity cards and ration books for clothing and food were also introduced.  Australia had to provide food not only for Australians, but for British and American troops- a total of about 13 million people.

I have previously mentioned rationing of fabric and clothing, but food items such as meat, tea, butter and sugar were also rationed and prices for these items set. Daylight savings was also introduced in a few states (not QLD which still doesn’t have daylight savings) to boost production hours . 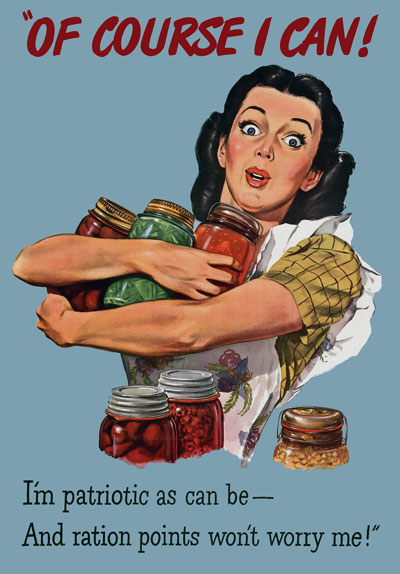 Fish, sausages, chicken, ham and rabbits were not rationed. The rabbit-oh and fish monger would visit homes once a week selling fresh produce and skin or scale them for customers on the spot. In the country kids would be in charge of catching rabbits or fish. Offal (brains, hearts, livers and kidneys) was more readily available than better cuts of meat and formed a large part of people's diets. The milkman, butcher and baker made regular deliveries to homes, sometimes still by horse and cart because of petrol rationing. For other shopping at the grocers rationed goods such as sugar, tea and flour would be weighed to make sure that they did not exceeded the ration allowance for that week and the required coupons would be collected. 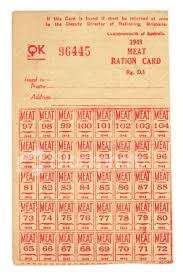 Other fruit and vegies typically eaten (but not rationed) included potatoes, cabbage, tomatoes, parsnips, apples, pineapples and strawberries, depending a lot on where in Australia you lived.   Other food available included custard powder, peanut butter, dripping, sardines and honey. 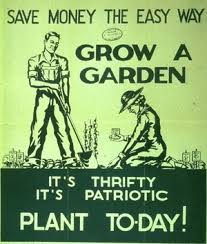 Many Australians were already keen home vegetable gardeners, being self-sufficient, with fruit and vegetables and a “chook shed” down the back. Most house blocks were about 30 or 40 perches in size, or about 800 or 1000 sq. meters, much bigger than the 400-600 sq. meters that developers are now dishing up.  Some people turned over their whole front and back gardens to their “Victory Garden”,  sometimes  selling the excess to raise funds for the front. 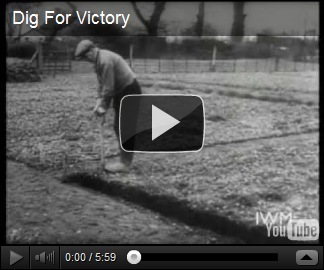 Here is a cute little movie about wartime cooking.  Sally and Jane are called upon to assist their  Grandmother  in cooking dinner and are sent into the garden to find a cabbage. We learn from the girls  never to boil green vegetables in vast quantities of water. I wish my grandmothers had of seen this film! 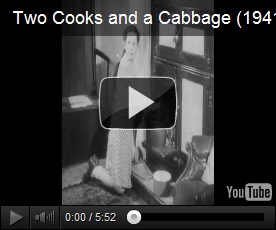 Some great brochures of rationing in Australia include: Sharing meat for freedom, How to stretch your butter ration and why rationing?

Recipes designed to cater for the lack of eggs, butter and meat appeared in newspapers and magazines on a regular basis, like this Kraft Cheese ad.

Chocolate was rationed to soldiers in WWII.  Imagine life without chocolate!

Here’s another great video about war time cooking, the first of  a series actually, and worth it if you have time. 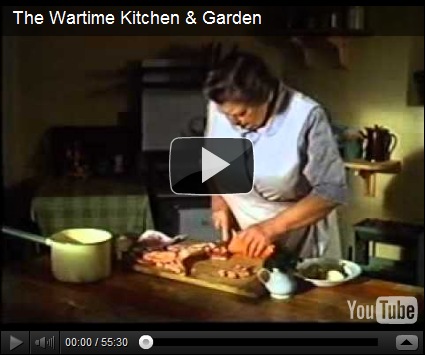 If you are interested here is a great blog about one woman's attempt to follow the 1940s ration diet for one year!  I would like to follow it for a little while, but I might start with a week (but not just yet).  Right now I am off to plan my victory garden……….