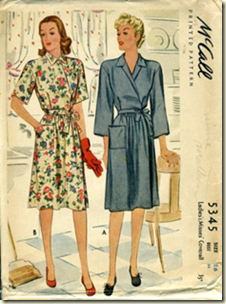 I love this pattern for a housedress or gown. I have just bought it on ebay from the US – how exciting!   And I WILL make it. Promise.

The wrap style is perfect for putting on first thing in the morning – if you have put in your rollers or have done your hair and makeup, you won’t mess them up taking it off.  And of course you would have to take it off before leaving the house - the illustrator wants to make sure we understand the function of this garment; one wears this coverall with sensible (but very cute) little flat shoes in the kitchen, where the carpet sweeper awaits us once we doff our bright red rubber gloves....I NEED me some of these. Why are all rubber gloves now pale pink, green or yellow – yuck!  If you know where I can buy some (other than bulk through alibaba) please let me know!  It would also be perfect for putting on after a swim.

I’ll keep you updated of my progress.

In December 1941, US servicemen and women started to arrive in Australia, which resulted in increased levels in both rural and industrial production to house, feed and clothe them. The opening hours of restaurants, hotels and clubs were changed to entertain the troops. The Americans brought with them a new and different English speaking culture to Australia, as well as goods such as coffee, chocolate and stockings that were nearly impossible to find for ordinary Australians. 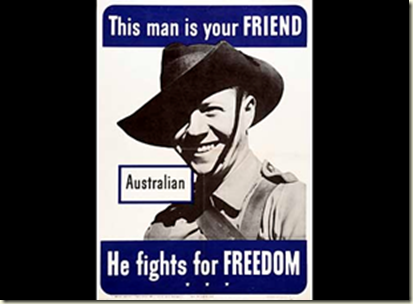 This poster was produced in the United States by the Graphics Division, Office of Facts and Figures, depicting a smiling Australian serviceman, to promote good will between American servicemen and Australians.

Unfortunately, when it was realised that there would be thousands of black servicemen amongst the US personnel, the Advisory War council decided on 12 January 1942 that:

… no black American troops would be accepted in Australia since it could affect 'the maintenance of the White Australia policy in the post-war settlement’. [David Day, John Curtin: a life, 1999, p 441]

However we could not afford to offend the Americans and the Advisory War Council decision was overruled. As a result, almost 1 million American service personnel, including about 100,000 African-Americans, passed through Australia during World War II. 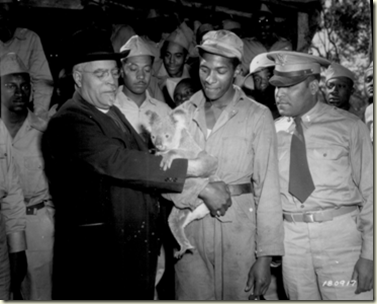 Bishop John Andrew Gregg of African Methodist Church in North Central United States trying to hold a koala (they are NOT cuddly) while African-American US Army soldiers looked on, 21 Jul 1943 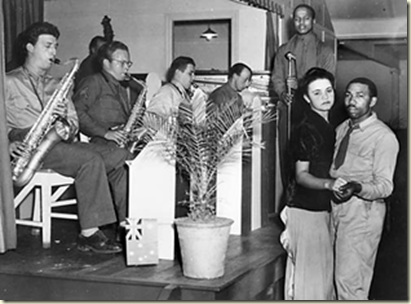 The US Fifth Air Corps orchestra plays for a dance at the the American Red Cross Dr Carver Service Club for the use of coloured troops serving in Australia. At the microphone is Galvin Johnson of Missouri, USA, and dancing are Miss Lila Draper and Private Bob Walker from New York City.

Thankyou everyone on our side in WWII, whatever your gender, colour or race.

WWII,racism,gown,Promise,rollers,hair,makeup,garment,kitchen,carpet,rubber,December,women,Australia,production,hours,restaurants,hotels,Americans,English,goods,stockings,Australians,friend,States,Graphic,Division,Photolithograph,poster,Graphics,Office,Facts,Figures,Australian,American,personnel,Advisory,council,January,maintenance,White,policy,settlement,David,John,Curtin,life,decision,million,African,World,Bishop,Andrew,Gregg,Methodist,Church,North,Central,Army,Fifth,Corps,orchestra,Cross,Carver,Service,Club,Galvin,Johnson,Missouri,Miss,Lila,Draper,Private,Walker,York,Thankyou,gender,servicemen
Posted by Deb Clark at 18:35