It''s Saturday again, which in my home is housework day, including ironing.  Now ironing is not something that I love, especially with the weather is as warm as it is here, but now that I watch an old movie while I iron, the time goes much faster.

Todays movie (kindly aired by GEM) is 'The Yearling', a 1946 Technicolor family film by MGM which features a fawn - Bambi like - who is adopted by a young boy. But the movie is so much more than that.


The boy, Jody, is played by ten year old Claude Jarman, Jr., and his parents are played by the wonderful Gregory Peck and Jane Wyman.   The fawn is orphaned when it's mother is killed in order to use its insides to save Peck from a snake bite.  Despite being extremely poor, the parents agree to Jody looking after the fawn until it's old enough to go back to the wild.  Of course Jody and the fawn become so attached that this proves difficult, even though the grown deer is a huge nuisance, eating crops and trashing the farm.


The film was based on Marjorie Kinnan Rawlings’s novel of the same name written in 1938.  It was initially published as an adult novel, and won the Pulitzer Prize for Fiction, staying top of the bestseller
lists for ninety-three weeks, and selling over 250,000 copies within its first year.  It was later marketed as a book for young adults.

Not only is there the aspect of the boy and his pet, the story tells the story of the early pioneers - it's set just after the American civil War - the handmade log homes and no indoor plumbing (the washing's done down at the reek), the reliance on crops and stock and good weather, the constant battle and work, and deaths, including those of  Jody's siblings who have died young of illnesses.  At one stage Jody says "I'm almost eleven, past the age of dying I reckon."

While Peck as Ezra "Penny" Baxter, the father, is loving and understanding, taking the boy hunting and letting him go rambling in the woods, Jody's mother Ora is distant and grumpy, scared of showing Jody her love for him, worried that he too may die.  She also refuses him a pet, including a baby raccoon, saying they can't afford the rations to feed it.  Jody's best friend, the sickly Fodder-Wing, of course has one as a pet.  Donn Gift was almost twenty when he played the role of Fodder Wing.

An early seen shows stock killed in the barn - by a bear.  They all decide the Bear must be shot, so Jody and his pa follow the bears tracks. The dogs find the bear and attack it, but it escapes into the river, leaving the dogs injured.  It's a fairly intense scene - no CIG back then so the animal scenes use real animals - dogs were bought specially for the part and the bear was rented.   Although the bear appears to get injured, it seems it could look after itself.  It was a Florida black bear from the Everglades Wonder Garden, called Tom.  Tom was by no means tame, but would drink Pepsi Cola from a nipple-fitted bottle - his favorite drink.  He learned to bite off the nipple to get out the last drops.  His trainer Bill Piper, obviously not thinking clearly,  tried to pull the bottle away just before Tom drained it.  This enraged the bear and Tom promptly The bear grabbed Bill with claws and teeth, knocking Bill to the ground.  It took 27 stitches to repair Bill's throat and shoulders. This image is from an old post card.

Tom did actually escape into the river - I am unsrue if he was recaptured.

Jody and his father later  go into town, where they get into a fight defending their friend, a sailor named Oliver. They return home with a gift of fabric for Ora, who hasn't had a new dress in seven years.  She does not accept the gift graciously, shouting that the money should have been used for other things.   Later there is a lovely seen of Peck being a mannequin for the dress, as Ora sews the finishing touches.

Shortly after Jody and his dad go looking for stolen stock, and Baxter is bitten on the hand by a rattle snake.  He sucks out the venom and spies a deer, a doe, who he shoots, thinking to use it's innards to draw out the poison from his wound.  It's up to Jody to cut these out and give them to his Pa, and then run to Fodder-Wings family to ask for them to fetch the doctor.

Too late they realize the doe had a fawn and once his father is out of danger, Jody returns to find it.  Baxter puts his foot down and make Ora accept the fawn into their home, despite it's need for valuable milk. "It won't be a bit of trouble" Jody tells his ma, just as the fawn sticks his head in the whole bucket of freshly gathered milk.

Apparently the real-life Flag was 30 different white tail deer of different ages,  trained by Walt and Gert Boettcher who owned a tourist deer farm in Wisconsin.

Jody and the fawn become great friends, and frolic around the woods, a bit like Thumper and Bambi, but to louder more annoying music.  Jody has trouble thinking of a special name for his fawn, rejecting his mother's suggestion of Rover.  He goes over to Fodder-Wing's home to ask him what to name it, only to find that his friend died, but an older brother tells Jody that he would have named the fawn flag, after the white tail sticking up like flag.  The funeral scene is quite beautiful.

After a hard year of floods and other hardships, the fawn becomes a yearling - and a handful.  He eats newly-grown crops, destroys fences, and tramples on tobacco crops. Meanwhile Baxter hurts himself clearing forest to plant cotton and is bed-ridden, so Jody tries to be the man of the house.  He is also growing up.

When it appears that Flag has eaten a whole field of corn,  Jody has to replant it, and build a fence around it to keep out Flag.  His mother helps him with the last bit of fence, after seeing how hard he's been working.  Unfortunately Flag manages to jump it, even though the fence is about 2 metres high.

His Pa orders Jody to take the deer out into the woods, tie it up, and shoot it.  Jody takes the deer out, but instead of killing it he orders the deer to go away and never return - as if the deer can understand. Of course Flag returns, and Ora shoots, wounding it.  Baxter orders Jody to put the deer out of its misery, which he does, after yelling at his mother for missing on purpose.  We don't see Flag in these scenes, which is good, as injured animals are hard to watch and it wasn't faked in those days.

After telling his mother that he never wants to see her again, an angry Jody runs through into forest and everglades.  He falls asleep in an old boat, which drifts into the river.  A few days later, he is rescued by a paddle steamer, and returns home. He and his Pa make up, and Jody tells him he didn't mean any of what he said. Baxter tells him that Ora had been out searching for him for three days, and tells him how he hopes that his life will be better, and that he hopes he will stay a farmer like him and do good works like build a well so "no woman will have to go to the creek to fetch water."

Just as Jody goes into his bedroom, Ora returns, and finding Jody back breaks down and cries.  "I thought I'd lost all of them" she weeps to her husband. For the first time we see Ora embrace her son, and it really is the best moment of the film. 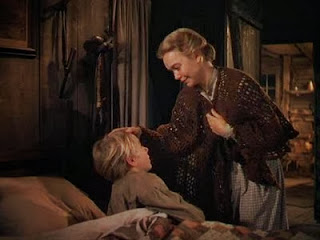 The movie ends with Jody falling asleep and dreaming of the good times he had with flag.

The Yearling won Academy Awards for Best Art Direction-Interior Decoration - indeed the scenery is stunning and the sunrises and sunsets are glorious. It also won Best Color and Best Cinematography and was nominated for Best Actor in a Leading Role (Gregory Peck), Best Actress in a Leading Role (Jane Wyman), Best Director, Best Film Editing and Best Picture. Jarman received a  special "Juvenile Oscar" as well as annual award given back then by Parent’s Magazine recognizing wholesome, family entertainment.

The award was presented by previous winner, Margaret O’Brien, who had been in 'Meet Me in St. Louis' and 'Little Women.'  Apparently Jarman later mailed her a fish, one of several he and his father caught on a trip, which she acknowledged with 'he must be a pretty good fisherman.”

Overall, a lovely pre-Christmas tear jerker and family friendly - although eight year old boys may get bored and disapear.

Email ThisBlogThis!Share to TwitterShare to FacebookShare to Pinterest
Labels: 1940s, movies, the yearling