In February 1942, many Australians thought that the Japanese would invade Australia.  Anticipating enemy air attack, blackout restrictions were introduced and air raid warning instructions issued. Barbed wire was also strung across many east coast beaches.  I can’t imagine seeing this on my daily walk on the beach!

On February 1  The Command staff of the united States Eighth Air Force had reached England – this is the start of the bomber squadron we’ve seen in so many movies, including Pearl Harbour.  On February 2 US President Roosevelt signed an executive order directing the internment of Japanese Americans and the seizure of their property.  Many Japanese people had already been kicked out of their homes by their neighbours. 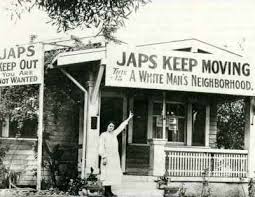 Internment camps were set up for three main reasons in all allied countries– to prevent residents from assisting our enemies, to appease public opinion and to house overseas internees sent to us for the duration of the war.

As the war progressed, Japanese residents were interned en masse in Australia, and in the later years of the war, Germans and Italians were also interned especially those living in the north of Australia.

Australia interned about 7000 residents, including more than 1500 British nationals, during World War II.  A further 8000 people were sent to Australia to be interned after being detained overseas by Australia's allies.   Prisons in the north, such as one in Townsville, were used to hold prisoners until they could be sent to internment camps in the south.  You can read more about all the camps here.  At its peak in 1942, more than 12,000 people were interned in Australia.

Dorothea Lange was hired by the War Relocation Authority during WW II to document the internment of Japanese Americans, but the US government suppressed most of the photographs she was hired to take   Ninety-seven percent of the images Lange took during the Japanese Interment in California were never published.   Here are a couple. See more of her amazing photos here.

Despite the horrors of WWII, I often think that my love of the era started with old black and white war movies, usually shown on TV on a Sunday afternoon, when it would be great to get cosy in the lounge and get lost in the drama and wonderful uniforms.  Later I studied history in school and began to  inhale history books on the war.  My mother’s parents had lived in Holland during the war, and grandpa was a POW in a German prisoner of war camp.   Their stories enraptured me , and also my boyfriend (now my husband), and we both sat glued at our weekly visits when they would tell us of eating ’roof hare’ (cat), and grandma transporting documents for the resistance under the baby (my mum) in the pram.

When I had my first child in 1993, a brilliant UK TV show began -  "Good Night Sweetheart". 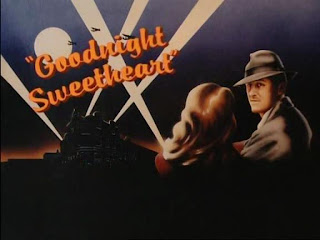 It was comedy,with a tiny bit of drama, and a little corny, but the costumes were great and there was time travelling and war time 1940s– my favourites!

Gary Sparrow (Nicholas Lyndhurst ), a TV repair man , finds the time portal by accident and stumbles into a Blitz bombarded East End London whilst on a call out.  He goes into the Royal Oak to ask for directions, just thinking he’s a bit lost, and meets Phoebe Bamford (first played by Dervla Kirwan and later, Elizabeth Carling), the landlord’s daughter .  She is  married to a serving soldier, and he is married to a nagging wife, Yvonne (played by Michelle Holmes and then Emma Amos ) and they soon begin a relationship – he has an affair 50 years apart.  Gary brings her rationed items (from the future), while singing (Beatle and Elton john) songs and takes 1940s items to the future to sell in his memorabilia shop that he eventually sets up.

Gary’s mate, Ron Wheatcroft (Victor McGuire) is a printer, who helps Gary along by printing 1940s money.  Poor Ron cannot enter the portal, despite his best efforts, and is also unlucky in love , so he is the perfect fall guy.  There is also the resident copper, P.C. Reg Deadman (Christopher Ettridge), who is a bit dim-witted, but also has a more intelligent relative alive in the future. 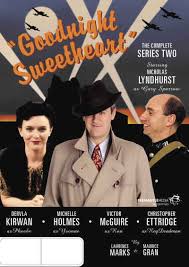 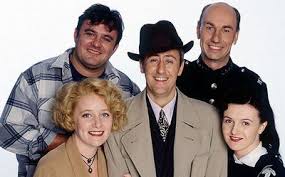 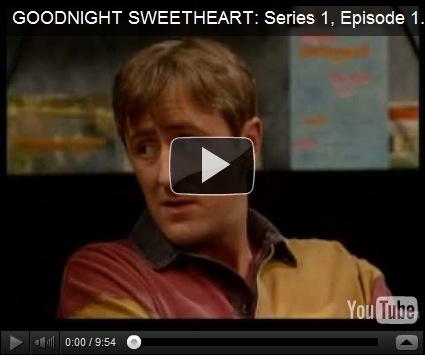 I hope it’s raining after school, so I can watch it again with the kids!