On 5 March 1942 the 34 Squadron RAAF drove to Daly Waters airfield in the Northern Territory, about 600 km south of Darwin, where they established their Headquarters in a tent.   The  Squadron had been hurriedly formed at Darwin Civilian airfield at Parap in the Northern Territory on 23 February 1942, four days after the first Japanese air raids on Darwin on 19 February 1942.  It initially comprised two officers, four airmen and two DH-84 Dragon aircraft.  The aircraft was initially used to transport freight and Japanese prisoners. Flight Lieutenant J.W. Warwick was the first acting Commanding Officer of the unit.

Headquarters in a tent       Source

Daly Waters housed RAAF bomber and maritime patrol units from early 1942, when enemy raids on Darwin forced a dispersal of aircraft and personnel.  By late 1943, the base was thought to be too far south, and operational flying from the base ended in favour of more northern bases.
Guess what I found in my 1942 Vogue Magazine?  Scotty Dogs! 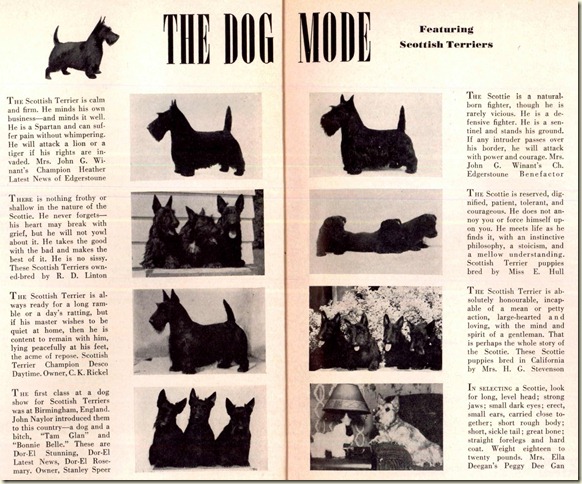 A
ren’t they gorgeous!  And here are some of the supporting ads.  Who knew they featured pets in Vogue?!  All the trendy dog breeds of 1942 -

Email ThisBlogThis!Share to TwitterShare to FacebookShare to Pinterest
Labels: 1940a, scotties, war