On 14 May 1942 the Cairns Post reported the kamikaze attitude of the Japanese airmen who had attacked Pearl Harbor the previous December:
THE HUMAN TORPEDO.
Japanese newspapers are claiming that the airmen who attacked Pearl Harbor and other Pacific bases never expected to return - that they treated themselves and their machines as the same aerial torpedo, which was to be launched straight at the objective. ......The Germans, too, from the earliest days of their attack on Poland, used the dive-bombers as a form of artillery to support ground troops, but their theory never included the deliberate loss of pilot and machine as part of the process. In spite of the Japanese news- papers, it need not necessarily be assumed that the far Eastern enemy .is steadfastly committed to the plan of treating men and machines as irrecoverable projectiles; and if they did, it is by no means certain that they could hit the mark in a serviceable proportion of attacks.

The same paper published results of a survey by Fortune Magazine in America that showed the general populations attitude to the war:
The U.S. people have an astoundingly uniform belief about the prospects of the war, and their willingness to fight it to a finish.
67.8 % believe the war will last more than 3 years.
80.6 %, though absolutely confident of winning," believe it is going to be "a very tough job."
70 % of the public are" willing to have the Government register all male civilians: for work in defense industries "wherever they are needed": strictly ration all food or materials "that might become scarce"; make war workers who strike join the Army or Navy.
68.4 % believe the Government should register "more able-bodied woman" for full-time, war-¿me jobs (unless they have' children).
86.3 % believe that Mr Roosevelt is the best man to have as President now, “though he has made some mistakes on the whole, he is doing a pretty good job.”
Also on this day in 1942, about a week after two American Kittyhawks had flown under the Sydney Harbour Bridge, the Dutch thought they would go one better.
The Dutch had evacuated 11 aircraft to Australia comprising two DC-2's, two DC-3's, three DC-5's and four Lockheed 14 aircraft and were coerced into selling their aircraft to the USAAF. As part of the sale they were required to test fly all their aircraft before the handover to the Americans.
To display their unhappiness with the forced sale of these aircraft, the KNILM staff decided to have all aircraft ready for a spectacular test flight over Sydney Harbour on 14 May 1942. They had over 50 passengers on board comprising ground staff, waiters and waitresses and kitchen staff from the restaurant at the airport.
After several aircraft buzzed the Dutch destroyer Tromp, a DC-2, a DC-3 and a DC-5 lined up another target - the Sydney Harbour Bridge. Approaching the bridge from Sydney Heads they flew in line astern under the Bridge, pulled up, made a wide turn and then flew in single line again under the bridge and then returned to Kingsford Smith Airport. 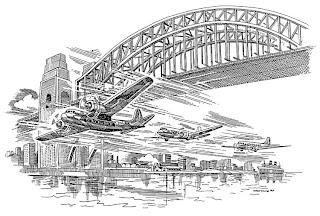 The Dutch aircraft that flew under the Sydney Harbour bridge were as follows:-

A few weeks ago I posted a series of cotton fashion from the may 1942 Good Housekeeping Magazine. I got to part 4, and then got distracted and forgot the rest, sorry! Here is part 5 - pretty dresses with ric rac trim: 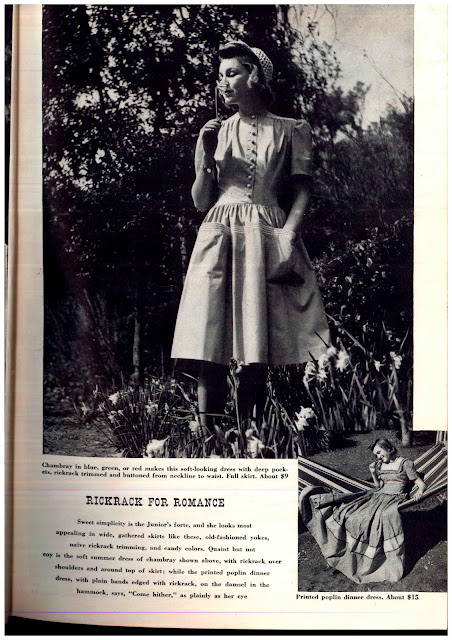 If you want to try and ad some ric rac to your next vintage style project, here is a little tutorial.  It suggests sewing a straight line down the centre of the ric rac.  I have also used a zig zag stitch when sewing it onto a quilt, as it gives a bit more strength over the seams.  New ric rac is not cheap to buy, but if you keep your eyes open at the op shop or thrift shop, you can often find unopened vintage packets for around a dollar.  the color may not be what you are looking for, but it can be dyed.

You can even make cute rose embellishments for rings, pins or hair clips. You can see a tutorial at the Ribbon Retreat Blog. 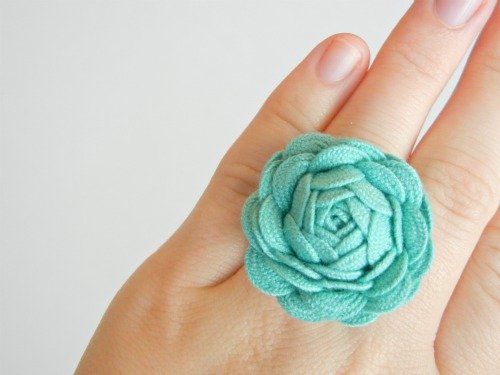