Perhaps the most important naval battle of the Pacific Campaign of World War II, the Battle of Midway, took place between 4 and 7 June 1942. The United States Navy positively defeated an Imperial Japanese Navy attack against Midway Atoll, inflicting irrevocable damage on the Japanese fleet. The Japanese had sought to eliminate the United States as a strategic power in the Pacific, and planned to lure the United States' aircraft carriers into a trap, partly as retaliation for the Doolittle Raid on Japan's home islands in April and at the Battle of Coral Sea in early May. Japan intended to occupy the strategic Midway Atoll, which would help in their planned attacks against Australia, Fiji and Samoa. Thankfully American codebreakers were able to determine the date and place of the attack, and the US Navy was able to set up an ambush of its own. The U.S. was badly outnumbered and its pilots less experienced than Japan's. Even so, it sank four Japanese aircraft carriers the first day of the three-day battle and put Japan on the defensive, greatly diminishing its ability to project air power as it had in the attack on Pearl harbour six months earlier . The U.S. lost one carrier, 145 planes and 307 men, while Japan lost four aircraft carriers, a heavy cruiser, 291 planes and 4,800 men. After Midway, the two opposing fleets were essentially equals, and the United States soon took the offensive, with Japan's shipbuilding and pilot training programs unable to keep pace in replacing their losses . 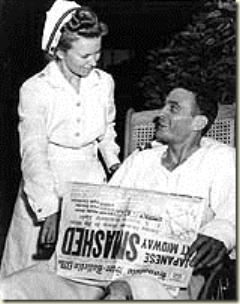 Ensign George H. Gay at Pearl Harbour Naval Hospital, with a nurse and a copy of the "Honolulu Star-Bulletin" newspaper featuring accounts of the battle, on about 7 June 1942. He was the only survivor of the 4 June 1942 Torpedo Squadron Eight (VT-8) TBD torpedo plane attack on the Japanese carrier force.