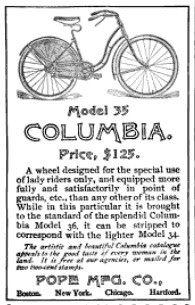 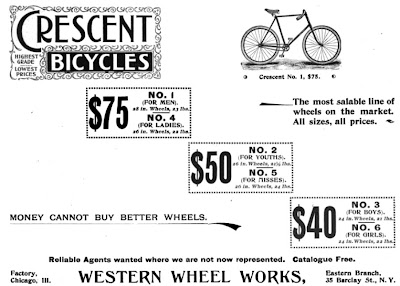 Bicycling became almost a cult in the 1890s.  The development of the pneumatic tyre and the mass production of machines meant that cycling was now comfortable and affordable, and as Queen Victoria Herself had purchased tricycles for her daughters (Starley's), it also became acceptable.  As hundreds of young bicycle manufacturers competed for sales, prices dropped from over $100 to as low as $20 for a new cycle, making them in the reach of just about anyone.


The Pope Manufacturing Company in Hartford, Connecticut  had been making bicycles since 1878, and at the height of the bicycle craze in the 1890's, Pope was the city’s largest employer, with 4,000 workers producing 600 bicycles a day.  It is estimated that in 1897 between 1 1/2 and 2 million bicycles were manufactured n the US, and that by 1900 there were about 10 million bicycles in use (from a population of 75 million).

By 1896 the Raleigh Cycle Company in Nottingham, England was making 30,000 cycles a year in the largest factory in the world, and produced more cycles globally than any other company. I don't think this was considered normal bicycle riding attire, however!

The bicycle was considered the freedom machine.  People from all walks of life could afford not only to buy one, but to store it and learn to ride it - a bit different from horse riding. The bicycle was the instrument of social change in many ways, including allowing Victorian women mobility and independence.

"Let me tell you what I think about bicycling. It has done more to emancipate women than anything else in this world. It gives her a feeling of self-reliance and independence the moment she takes her seat; and away she goes, the picture of untrammelled womanhood. I stand and rejoice every time I see a woman on a wheel . . ."
-- Suffragette Susan B. Anthony in a Feb 2, 1896 speech, quoted in the New York World

I love this ad from 1896 - finally a woman's word is taken seriously!

Although many women still wore their everyday dresses for cycling, special outfits did develop, and the  rational dress movement gained momentum, helping liberate women from corsets and ankle-length skirts. This Punch cartoon illustrates the point that many women enjoyed the freedom of the new fashion.


Some outfits kept the look of the longer dress or jacket, but hid bloomers underneath - much like the riding habits of the time. This one is French, circa 1895 (source). Stunning, don't you think? 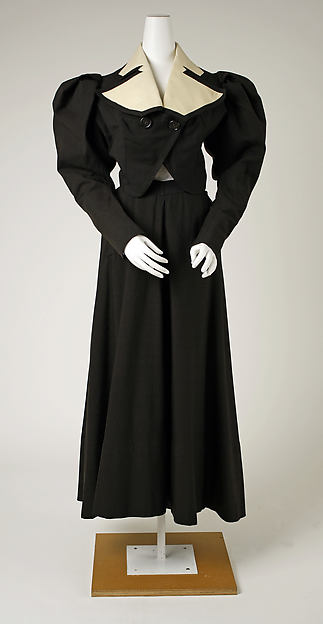 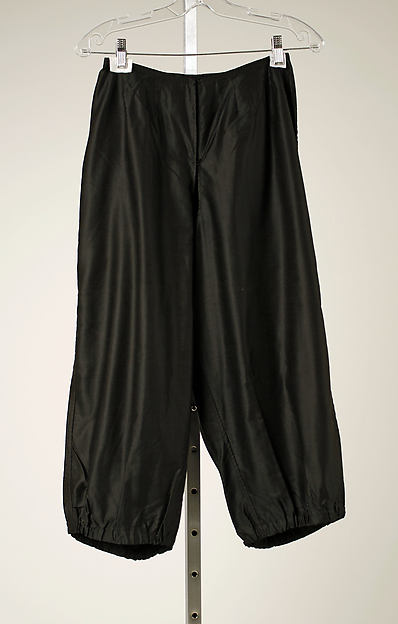 The other popular development in cycling fashion was the bifurcated skirt in about 1892, that was like pants at the back with the modest appearance of a skirt at front. This American suit of wool, linen, leather and silk also includes a pair of gaiters, which would provide protection for the legs. (source) 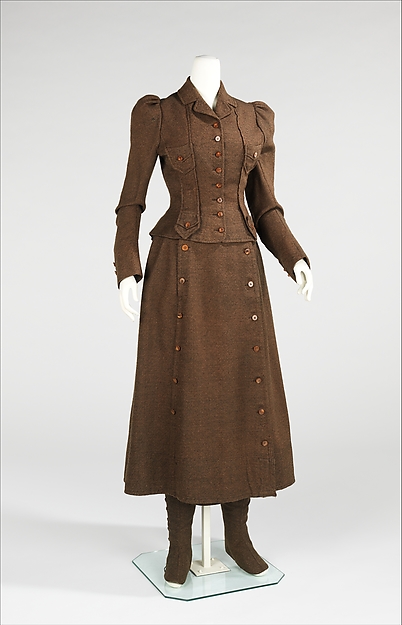 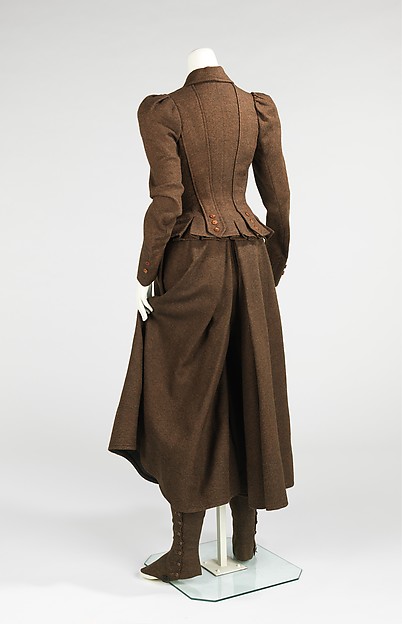 Bloomers and knickerbockers made bicycle riding even easier for women, but the style was still ridiculed by many as being unfeminine and unattractive. These outfits are from about 1895.  What do you think? 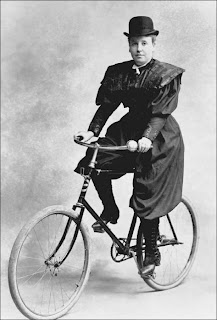 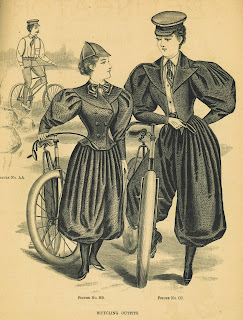 There was even music written about these intrepid women cyclists (source):
Oh, the bicycle girl, when she gets on the road, Is bound neck or nothing to go! 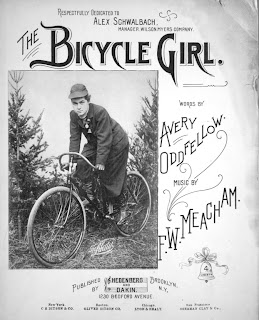 Myself I love the calf length skirt, and I adore the hats!  So much nicer than today's regulation helmets.
In warm climates, like Australia, a blouse was often worn instead of the jacket, and a sensible straw hat for protection from the sum.

Separate skirts and bloomer continued into the 1900's, such as this wool and linen American pairing (source). 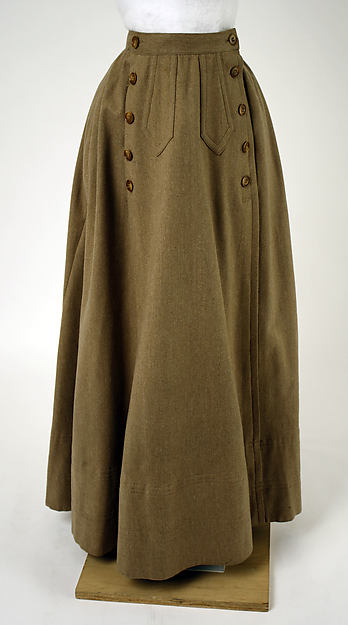 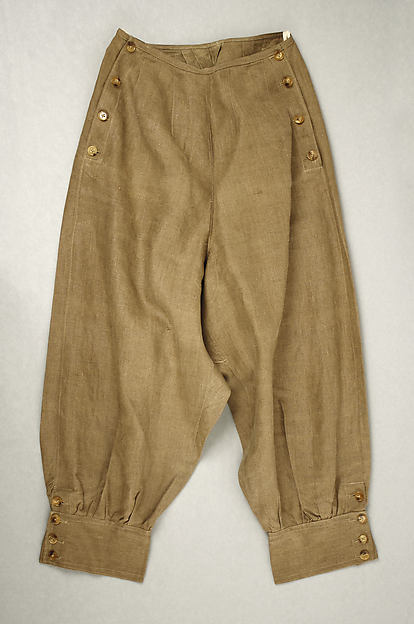 Although bloomers did also remain popular, and began to be manufactured by reputable companies, such as this suit (below left) by A.G. Spalding and Bros. from 1902.  It looks remarkably like the charcoal gym suit of a few years earlier by the Columbia Gymnasium Suit, Boston, Mass. (below centre source). 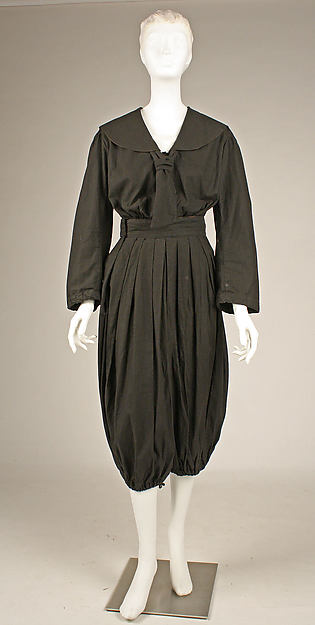 In addition to the cycling outfit, the well-dressed woman also wore leggings or gaiters, a hat, doeskin gloves and perhaps gauntlets, and a pair of the broad, low, rubber-soled cycling shoes which had first come on the marker in 1891. A bicycle belt, from which hung a small leather purse, completed the outfit.
Those undertaking a bicycling expedition (defined as any trip over an hour in length) were also recommended to outfit their bicycle with a lamp, and to pack matches, tools, a repair kit, sewing materials, and first-aid supplies (and baby?!).

You'll notice that many of the costumes are sombre colours,  much like the riding habits that had been made by men's tailor's rather than seamstresses. Apparently the stylish women would dress to match her male companion, so grey, brown, dark green, or navy were the most popular colors.


What ever we may think about bloomers, cycling and bicycles really did change the face of fashion - and not just for women.  Men's cycling fashions are next!
Deb xx