A brief history of the telegraph in Australia


If you’ve read or seen Terry Pratchett’s Disc World series, and Going Postal in particular, you will understand what a shutter semaphore tower is.  Semaphore lines, or optical telegraphs, that sent messages to a distant observer through line-of-sight signals existed in Europe from as early as 1792, and there were also instruments such as the heliograph used from the 19th century, that use the suns rays for signalling.
In the early 1850s businesses were pressing the government to find a quicker method of communication in Victoria.  Finally in 1853 a decision was made to investigate the possibilities of the electric telegraph,  and coincidently at the same time a young Irish-Canadian engineer named Samuel Walker McGowan landed in Melbourne.  McGowan had studied and worked in the USA with Samuel Morse, the inventor of the Morse electric telegraph who had made his first successful trial of the technology in the US in May 1844 with his famous message, "What hath God wrought."   Morse, a professor of arts and design at the University of the City of New York, had been inspired to develop his telegraph by the electrical work of Professor Joseph Henry of the Albany Academy in New York and the first electric telegraph invented by Schilling in 1832.  In the US by 1854 there was already 23,000 miles of line.  Morse encouraged McGowan to head for Australia to try to establish the telegraph there, as the Victorian Gold Rush saw great wealth and expansion, in that colony sending with him an experienced telegraphist and a quantity of telegraph equipment. 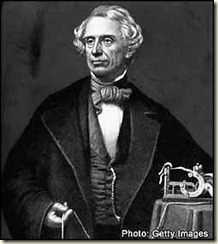 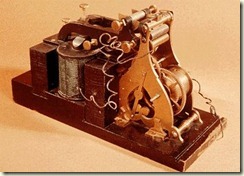 Morse and his telegraph c. 1844 , and his receiver used for the demonstration

How did it work? From Museum Victoria:
Telegraph signals were transmitted by an operator who depressed a key to complete an electric circuit and transmit current along the telegraph line. Releasing the key broke the circuit and cut off the current. Letters and numbers were represented by a sequence of short current pulses ('dots') and long current pulses ('dashes'), transmitted according to a defined code. The most widely used code was generally known as "Morse code".
At the receiving end of the telegraph line, the incoming current pulses passed to the receiving instrument, or 'sounder'. Two vertical wire coils were energised by the received pulses, causing the metal arm across the top of the coils to move up and down. The movement of the arm could be heard as a succession of metallic clicks. The interval between the clicks was short in response to the short current pulse representing a 'dot', or long in response to the long current pulse representing 'dash'. A skilled operator could interpret the succession of clicks as a pattern of dots and dashes and immediately decode the letters and numbers in the received message. 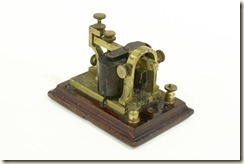 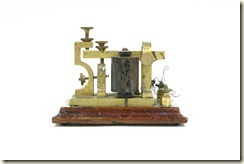 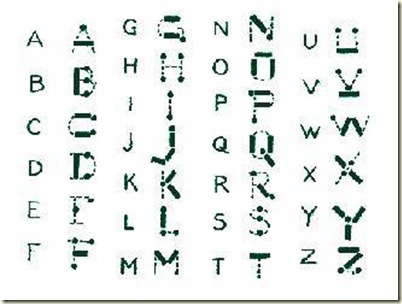 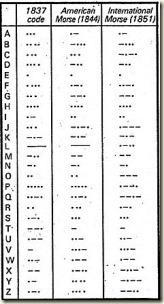 The telegraph network made it possible to communicate quickly - something that is taken for granted today – rather than sending messages by coach, pigeon, pony express or rail, but it was slow to catch on, as not everyone trusted information which had arrived via cable.  Some newspapers, for example, refused to print news which had arrived via cable as they doubted its truth, relying instead on pigeon post and human delivery. Reuters changed all this by setting up his "Submarine Telegraph" office in  1851 getting the ‘scoop’ on all international news.  One of the early important messages transmitted by telegraph in Australia was the first account to reach Melbourne of the Eureka rebellion on the gold fields at Ballarat in 1854.  The following year the line from Melbourne to Queenscliff was completed and the more shipping information and European news was made available.
In 1856 Victoria, NSW and South Australia agreed to collaborate on establishment of an intercolonial telegraph network, as messages going across colonial borders initially involved operators in one colony  transcribing a message which was then physically handed to a counterpart in the second colony for transmission over that colonies wire.  South Australia also installed its first line in Adelaide.

In Tasmania Hobart and Launceston were linked in 1857.  Adelaide and Melbourne were linked in 1858, the year in which the first NSW line was activated, and a Sydney-Melbourne link was in place by November 1858. The first line in Queensland was activated in April 1861, with a connection to Sydney in November of that year. The first transcontinental line in the US dates from the same year.

By 1867 there were 1,676 miles of line within Victoria, handling 122,138 messages (compared to around 7.92 million in the US and 5.78 million in the UK that year).  Western Australia did not have its first line until 1869, but by 1875 a link between Adelaide and Perth was established. In 1872 the 2,900 kilometre Adelaide to Port Darwin link (the Overland Telegraph Line or OTL) was installed at a cost of £300,000.  This allowed fast communication between Australia and the rest of the world, via Singapore, and was one of the great engineering feats of 19th century Australia.The Batavia (Jakarta) to Broome link was completed in 1889, with a link to Perth via the Cocos-Keeling Islands in 1901.

By 1876 there were over 8,000 miles of line in Queensland alone. By 1900 virtually everyone in Australia had access to the telegraph, but they were still expensive (the cost per word for a message from London was at that time equivalent to the average weekly wage) and usually kept for special occasions such as births and deaths.  These telegraph messages sent by an electrical telegraph operator or telegrapher using Morse code  was known as a telegram.  A cablegram was a message sent by a submarine telegraph cable, often shortened to a cable or a wire, and I’ll look at these next time.