Now that I am only working part time I am finally getting around to doing those things around the house I haven't’ had time for – like cleaning the laundry.   Once done, I actually had room to do the other laundry job I’ve been wanting to do – make laundry liquid. It is actually a vintage product too.  William Shepherd first patented liquid soap in 1865 – he probably had a wife who was sick of powder marks on her dark clothes! Liquid soap works better for more traditional washing methods, such as using a washboard and there is a smaller chance of residue being left on clothing. It is also much better with modern machines that use as little water as possible, and therefore make it harder for soap powder to dissolve.

B.J. Johnson also developed a liquid soap formula in 1898, and his company (the B.J. Johnson Soap Company) introduced Palmolive soap the same year, made of palm and olive oils.  The soap became so popular that B.J. Johnson Soap Company changed its name to Palmolive, and by 1900 was the world's best-selling soap.  Due to Palmolive’s popularity other companies began to develop their own liquid soap in the early 1900s. There are many recipes for liquid soap and laundry liquid floating around the internet. I have collected a lot of recipes over the years, and I thought I’d give this one from an old greenie magazine a go. 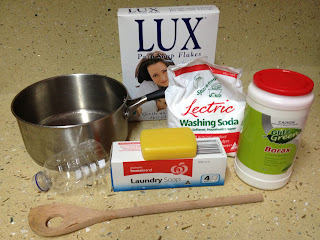 Borax is a naturally occurring mineral (Hydrated sodium borate, Na2B4O7 -10H2O), that is soluble in water. It can deodorize, inhibit the growth of mildew and mould, boost the cleaning power of soap or detergent, remove stains, and can be used with attractants such as sugar to kill cockroaches.  Borax can build up as boron in the garden if you  use your grey water, and its harmful to plants, so leave it out if you need to.

Equipment: medium sized saucepan, a slotted spoon or whisk to stir with, 10 litre bucket,  funnel, jug and lots of empty glass or plastic bottles or jars (I used an empty yoghurt bucket, I buy it by the 5kg now).

Method: measure the ingredients into the saucepan.  Bring the mix to the boil, stirring as it heats.  Make sure all the ingredients have dissolved, then pour the mixture into the 10 litre bucket. Fill the bucket to the top with water from the tap. 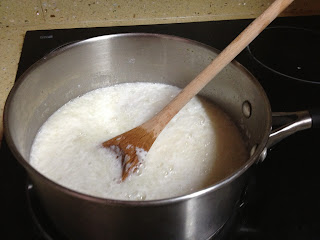 Allow the detergent to cool completely.  The mixture will thicken up as it cools turning it into a sort of gel.
Once it’s cooled, use a funnel to fill old bottles with your liquid detergent. 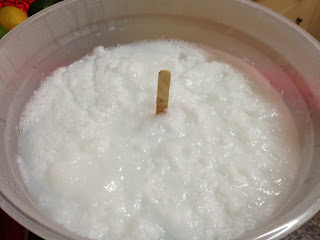 Fill to about 2cm below the top of the bottle so there is room to shake before use, as the mixture will separate – we didn't ad any of those nasty coagulating chemicals. Nor did we ad a foaming agent, so the mixture does not make bubbles like you may be used to – this does make it good for front loaders though.
Label, so no one accidentally drinks or eats it. I am working on a better label design! 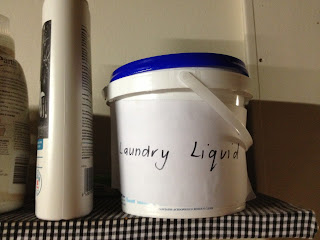 You can put the liquid on to stains and leave for about 10 minutes to an hour before putting in the wash (use part of your 1/4 cup). It's also great for washing around the house – cupboard doors, wall, floors etc.
You can add essential oils to your laundry liquid to give it a nice fragrance, but it’s just as easy to add a drop or two of the oil to the machine as the wash cycle starts – this way you can use different fragrances for different loads.  Lavender is nice for sheets, and eucalyptus for the kids school clothes.

If you prefer a powder to a liquid, you can mix soap flakes, borax and washing soda in the same quantities as above but without the water, and store in an airtight container. Shake well before each use, and add 2 tablespoons per wash.

Total cost:  To buy the ingredient cost about $15 (Australian), but I will be able to make at least four lots of liquid.  When you do as much washing as I do (five kids) it's a great saving. The equivalent amount of the Eco Store Laundry Liquid I like to buy would cost about $125!

The results? I am very happy - things are clean - there's no strong chemical or soap smell, but the washing smells clean. I was going to take a photo of my washing fluttering gently in the breeze, but it's been raining so much here even my line under the veranda is getting wt, so  I am using the drier at present (we had 30cm in 24 hours).

Anyway, making laundry soap is so easy, why not give it a try?!

If you use white vinegar as a fabric softener, at least for the towels every so often, not only will it leave them nice and soft it will get rid of any soap residue in the machine. It's also good n the dishwasher as a rinse aid.

I love vinegar too - go here for fifty uses for white vinegar, and here for uses for apple cider vinegar (I drink it in water every morning, instead of lemon juice, as it's much easier, and use it as a toner).