Australian Travel posters of the 1930s

You will have seen by previous posts that I love 1930's travel posters.  The French posters are incredible, and there are also some great American posters.   Today, though, I am featuring Australian Posters from my home state of Queensland.  In the 1930s the Queensland Intelligence and Tourist Bureau commissioned a range of posters by Eileen Mayo, Percy Trompf and James Northfield to attract holiday makers from the south to the 'paradise' in the north.  You may remember Paul Hogan's 1980's 'Put another Shrimp on the barbie' campaign, or seen the more recent 'Where the bloody hell are you' campaign. Personally I preferred the thirties, when all you needed to make a lasting impression was a nice beach, some pineapples, a cute girl and some fish. 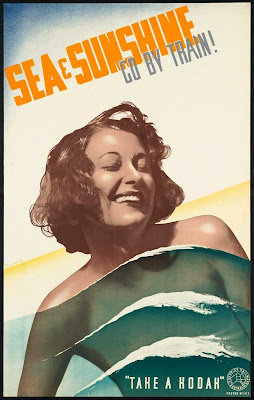 I imagine the the bright, colourful, optimistic pictures had wide appeal, especially during the Depression.   and in the 1930s his posters attracted lots of attention overseas. 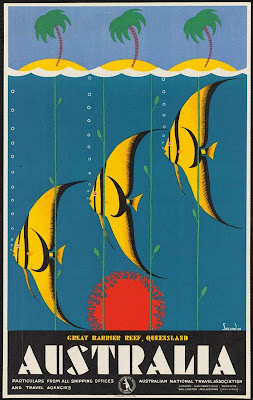 This poster is very similar to WWI and WWII recruitment posters - just imagine he's saying "where the bloody hell are you!"

My favourite poster is this one, produced in 1935 for the Queensland Government Tourist Bureau.   ‘The Sunshine Route’ includes various destinations such as Brisbane, Gympie, Great Sandy Island, Maryborough, Bundaberg, Gladstone, Rockhampton, and my home town of  Mackay. 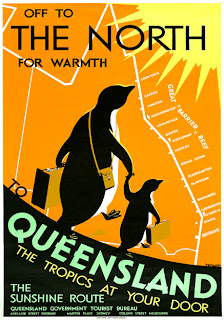 The artist Percy Trompf (1902-1964) was born in Victoria, Australia and began his commercial artistic career designing confectionery packaging. He also designed thousands of advertising posters but the widespread recognition of his posters for the Australian National Travel Association and the Victorian Government Railway is probably what he is most known for.

Do they make you want to visit?