I have 3 teenagers living at home at present - my 16 year old daughter  my 19 year old son and his 18 year old girl-friend.  I also have an 11 going on 16 year old, so sometimes it feels like our home is filled with teenage angst. I'm also coming to the conclusion that two bathrooms is just not enough!

Most agree that the fascinating creature known as the teenager came into being sometime in the early 1940s.  The word “teen-ager” itself likely made its debut in print in a 1941 issue of Popular Science Monthly.   This was the first time that the teen years became a recognized life stage, complete with its own fashions and behaviour.  Childhood itself had only been recognised for a hundred years or so at that point.  The notion of the teenager began in America, where for the first time adolescents had their own spending power - during and after WWII when America was completely recovered from the depression of the 30s, these teen-agers were given allowances or worked in part time jobs, while still at school, and were allowed to keep and spend their own money.  Advertisers quickly caught on.

In 1944 photographer Nina Leen prepared a photo article for Life Magazine entitled, “Teen-Age Girls: They Live in a Wonderful World of Their Own.”


‘Some 6,000,000 U.S. teen-age girls live in a  world all their own – a lovely, gay, enthusiastic, funny and blissful society  almost untouched by the war. It is a world of sweaters and skirts and bobby sox  and loafers, of hair worn long, of eye-glass rims painted red with nail polish,  of high school boys [not] yet gone to war.’

For the story, Leen followed around a group  of 12 teenage girls in St Louis, snapping various candid pictures as  they hung out together and met up with boys.

If alive today, these 'girls' would all be over 80 - our grandmothers and great- grandmothers. Here are some of those photos. 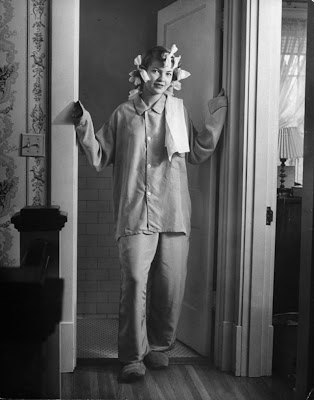 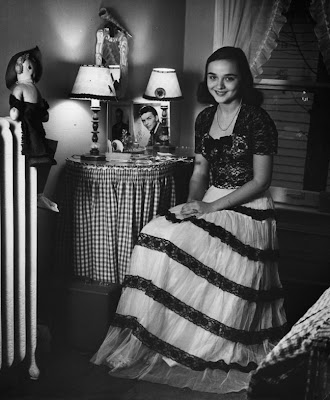 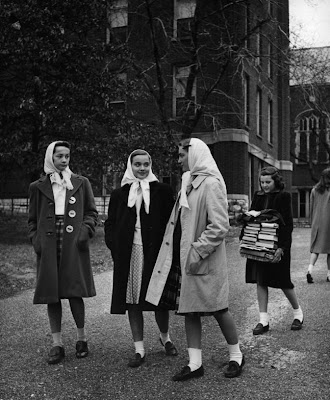 This outfit is similar to my winter school uniform in the 80s - but we had a brown plaid skirt and dark green jumper, with lace up shoes.

I love these photos - this is how I used to communicate with my boyfriend each night!

And this - my daughter still does this - with her headphones plugged into her i-phone.

Times really haven't changed that much, have they?  They still 'live in a Wonderful World of Their Own- - but we love them.