Yesterday I looked at the early years of the Great Depression.  Today's movie is set at the height of the depression, in 1936.  Typical of the era, My Man Godfrey is screwball comedy starring William Powell and Carol Lombard,  a light-hearted love story about a man who makes good and a couple who fall in love - just the sort of movie to cheer people up. 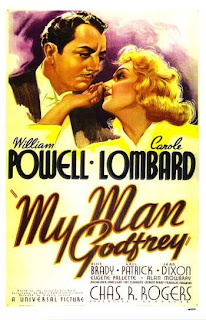 I have watched this movie a few times now, since I found the DVD at the thrift store for $2 (the black and white version), and I find something new in it each time - and the costumes are glorious   The story involves a socialite (Lombard as Irene Bullock) who steals a 'forgotten man'(Powell as Godfrey 'Smith') from her bratty, bitchy sister Cornelia (Gail Patrick),at the city dump during a charity scavenger hunt, and hires him to be her family's butler.

The chemistry is there from the outset, but Godfrey is recovering from a broken heart and tries to put Irene off.  Never the less she falls in love with him, and after he has 'made something of himself' they finally end up together, mainly through Irene's insistence.

Powell is just perfect in the role, both as the 'forgotten man' who tells the rich what he thinks of them, and as the more obsequious butler, and Lombard plays the kind, ditsy socialite to a T. The supporting cast is also outstanding. Irene's sister Cornelia Bullock is played by Gail Patrick, a lady I had not heard of but who plays the clever,witty, bitchy, yet glamorous part well. Irene's mother,  Angelica was played by Alice Brady a wonderful actress who sadly died from cancer in 1939, and her mooching "protégé" Carlo was Mischa Auer, who does a wonderful gorilla impression that my children thought was hilarious.
Irene's long-suffering businessman father, Alexander Bullock is played brilliantly by Eugene Pallette, but my favourite character is Molly, the sardonic, wise-cracking maid, played by Jean Dixon.  She is the only servant who has been able to put up with the mad antics of the family, and also falls for Godfrey.

The film was directed by Gregory La Cava, who helped write the screenplay with Morrie Ryskind, the man behind some of the Marx brothers best known films, and Eric Hatch, a staff writer on the New Yorker, who wrote the original novel the film was based on "1101 Park Avenue".  Powell had been brought in on loan from MGM for the part and, after reading the script insisted that he be joined by Carol Lombard, whom he knew well (they'd divorced three years earlier).

In 1957 the film was remade with June Allyson and David Niven in the starring roles. It's on my 'to see list'. In 1999, the original version of My Man Godfrey was deemed "culturally significant" by the United States Library of Congress and selected for preservation in the National Film Registry. It is now also available in colour.

If you need a bit of a laugh and a pick me up, have a watch.