As a mid-century and vintage lover, I of course love old movies and old TV shows - I grew up 'watching Be-witched' and 'Get Smart' after school, and although I loved the fashion, the homes and the cars, I never really thought much about the make up.  On shows like 'The Munsters' however, even kids begin to realise that someone was responsible for the 'people' looking like they did.  My family did not look like this, nor did anyone else's I had seen - 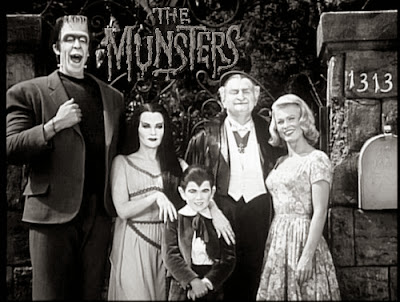 Well, except maybe the girl of the right!  Fred Gwynne played 'Herman Munster' and his Frankenstein's monster make-up, along with the looks for the other Munsters were designed under the guidance of Bud Westmore by Karl Silvera, Perc Westmore, Abe Haberman and Mike Westmore.

Which brings me to 'Faceoff.' It's an American reality show in which a group of prosthetic make-up artists compete against each other to create prostheses such as those found in science fiction, gender

swap, horror films and hospital shows.  My kids have gotten me hooked - we are into season 2.

The host is actress McKenzie Westmore (she was on 'Passions' for a number of years), and judges include (as we are constantly reminded) Academy Award-winning make-up artist Ve Neill (Ed Wood, Beetlejuice, Mrs. Doubtfire plus the Hunger Games), television and film make-up artist Glenn Hetrick (Buffy the Vampire Slayer, Babylon 5 and lady Gag Ga) and creature designer and director Patrick Tatopoulos (I Am Legend, Resident Evil: Extinction, Underworld: Rise of the Lycans).

If you haven't seen it, try and download it somewhere. Seriously, we all love it, from my eight year olds to my husband.  There are occasional nude models, but their exotic bits are fuzzed out.  The make-up ranges from full on prosthetics to full body painting, as well as beauty make-up and costume design.  It is very inspiring, and some of the contestants looks are interesting too. It's also great seeing the dynamics between contestants and picking who will win and lose each episode and who really deserves to leave - usually for their attitude more than their skill level.

In one episode on Season One McKenzie's father, Michael Westmore, is a guest judge.  Of course the contestents, most of whom hve gone to special effects school, all knew who he was, but we at home had no idea.  Google to the rescue!

Michael Westmore (born 1938) began his career in about 1960, and is best known for his work in Star Trek over the years, winning NINE Emmy Awards.  He also created make-up kits for CIA spies working overseas - awesome - and won the Academy Award for Make-up in 1985 for his work on the film 'Mask'.  And he is just one of a talented family.  His brother Marvin (born 1934) is also a makeup artist, and rans the Westmore Academy until 2010, when it was purchased by Empire Beauty Schools.  He is also the Founder & CEO of the George Westmore Research Library & Museum in Burbank, California.  The elder brother, Montague George "Monty" Westmore (June 12, 1923 – November 13, 2007) began his career in 1943 at Warners, then spent seven years at Universal, and went on to over 100 film credits and television series including the 1950s series"The Adventures of Ozzie and Harriet'.  He was Joan Crawford's personal make-up artist for ten years in her later career,on such films as 'What Ever Happened to Baby Jane?' and 'Strait-Jacket', although he once said that this involved setting out her make-up and false eyelashes and fetching her vodka and ice. "She was wonderful at gluing them on herself, and when you watch her pictures, you see how expressive her eyes looked," he said.  He was also Paul Newman's personal make-up artist on seventeen of the actor's films over the course of nearly three decades.  He shared the 1991 Best Makeup Academy Award nomination for his work as assistant make-up supervisor on Steven Spielberg's 'Hook.'

Their grandfather, George Westmore (June 1879 – 12 July 1931) hailed from England - the Isle of Wight - and became a wig-maker and  make-up after serving in the British Army during the Boer War. Afterwards he became a hairdresser by trade, and was reported to have cut Winston Churchill's hair.  He emigrated to Canada, and then the United States with his family,and specialized in wig-making.  Later he moved into make-up, he established the first movie make-up department in 1917 when he realised that not actors were good at applying their own make up. He was responsible for Mary Pickford’s curls in the late 1910s, including fake ones so that she didn't need to curl each morning - a look that was copied by many, including Shirley Temple.

Wally became the make-up department head at Paramount and Bud held the same position at Universal.

Frank, the youngest Westmore brother, worked on films such as "Farewell, My Lovely", "The Ten Commandments", and "The Towering Inferno". His television work include "The Munsters", "Planet of the Apes", and "Bonanza". He also won an Emmy for his work on the 1972 TV movie "Kung Fu."

George's eldest Montague "Monte" Westmore (July 22, 1902 – March 30, 1940) was Michael, Marvin's and Monty's father.  He was also a Hollywood make-up artist, and worked for both the Famous Players-Lasky studio and Selznick International Picture, where he was the head of the make-up department.  and yes, he worked on 'Gone with the Wind' (1939).  Earlier he was Rudolph Valentino's make up artist, creating his clean Latin look, and also did make-up for Gloria Swanson and Clara Bow. He died at young, reportedly from a  heart attack following a tonsillectomy, caused by the heavy workload on Gone with the Wind.
Special effects and movie make up is obviously a tough business.  I just hope all of the future 'Face-Off contestants know about the Westmore family and their hardships - I can't see McKenzie Westmore tolerating any slackers!  I believe Michael Westmore makes another appearance in Season 4, which will be great.

If you've seen the show, let me know what you think.  No spoilers though please, I am only up to Season 2 of 6!