A little while back I did a post about that great mid-century concern - Survival in Nuclear Attack. There are some wonderful and crazy movies around on this topic, and here are five of my favourites - all with vintage appeal of course!


1. This is my all time favourite - 'Blast from the Past'.  It's child friendly (mostly) with a little romance, has great actors (including Christopher Walken Sissy Spacek and Brendan Fraser) , wonderful fashion and a fully fitted out 1950s bomb shelter.  Planning to live underground from the time the bombs (Cuban Missle Crisis and Cold War) go off until its safe to emerge - 35 years later - Walken as nuclear physicist  Calvin Webber secretly builds enormous self-sustaining fallout shelter beneath his suburban home.  made in 1999, it is the ultimate prepping movie in my book!


2. For a completely different style of movie, there is the 1964 British-American black comedy film 'Dr. Strangelove' or 'How I Learned to Stop Worrying and Love the Bomb', which satirizes the nuclear scare. It was directed, produced, and co-written by Stanley Kubrick and stars, among others, the brilliant Peter Sellers, who plays several roles. When a crazy United States Air Force general orders a first strike nuclear attack on the Soviet Union the President and his advisers, as well as a Royal Air Force officer try to recall the bombers to prevent a nuclear apocalypse. Crazy but interesting!

3. The classic made in Australia 'On the Beach' is a 1959 post-apocalyptic movie based on the novel written by British-Australian author Nevil Shute after he immigrated to Australia. It stars (not Australian) Gregory Peck, Ava Gardner and Fred Astaire, and looks the experiences of a group of people in Melbourne as they await the arrival of deadly radiation spreading towards them from the northern hemisphere following a nuclear war a year previously - in 1964 no less! Not cheery, and they don't survive, but a great movie. Here's the final scene.

4. 1955's 'Day the World Ended' stars Richard Denning as Rick, a heroic scientist who, among others, must face off against a mutant monster, and protect the beautiful women (Lori Nelson as Louise Maddison and Adele Jergens as Ruby) after an atomic war destroys human civilization.  Shot in just ten days, it is a typical 50s horror flick - not a great movie, but some of the outfits are to die for!

5. Another satirical black comedy is 'The Bed-Sitting Room' from 1969, based on the play of the same name by Spike Milligan. The film is set in London on the third or fourth anniversary of the Third World War - a nuclear war which lasted two minutes and twenty-eight seconds, including signing the peace treaty. Three (or possibly four) years after the nuclear holocaust, the survivors wander amidst the debris mutating into household objects.  It is a very bizarre film, but the acting is wonderful.  Ralph Richardson plays Lord Fortnum, who is fearful that he will mutate into the "bed sitting room" of the title, and eventually does. Watch here with a glass or two of alcohol! 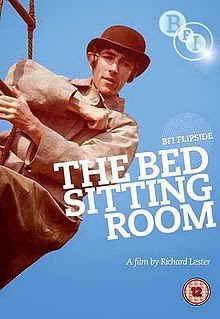 Have a wonderful weekend, Deb xx