Born in Figueres, Spain in 1904, Salvador Dali is probably best known for his moustache, his technical skill as a painter and the shocking quality of his imagination. Put those all together and you get Dali the hairstylist!
In 1959 Dali worked with Peter Leonardi, formally the hairdresser to Marilyn Munroe, to produce some modern, space age hair-dos.

Dali apparently began the designs with inspiration from his then new method of painting - using machine gun bullets to delineating an outline.  He of course did this in an orderly fashion, placing each bullet with care. He did actually once criticise Picasso's paintings as being 'painted with the speed of a machine gun." 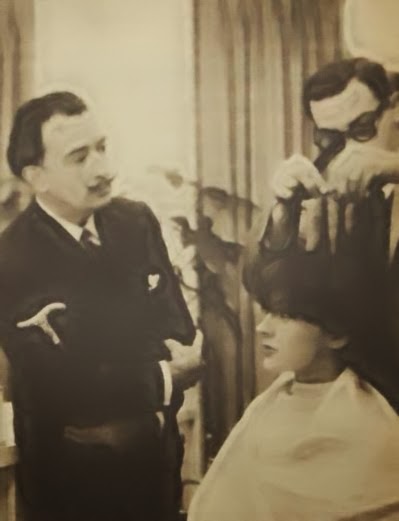 Dali wondered why women had been conteneted so long with their'prosaic' hair dos, and believed that his 'Bullet' hairstyle would one day become common place, with the hair serving as antenna for portable phones and tvs.

He really was ahead of his time, wasn't he?! Are you ready to try this vintage look?

Have a look here for some modern spiky hair inspiration.

The Dali Musuem
Dali & I: The Surreal Story By Stan Lauryssens
Posted by Deb Clark at 14:57