Todays breakfast was porridge.  1 cup of oats cooked with 3 cups of water (you can ad a pinch of salt or sugar but I don’t bother), boil and then simmer for about 10 minutes.  I like it with pureed pear and cream, but today had it with with some tinned (think home preserved) cranberries, which added sweetness and liquid. 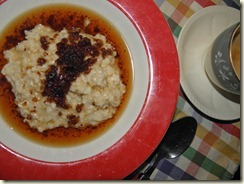 I did my four hour shift at the op/thrift shop today, and forgot to bring some fruit, so I had to hang out until lunch time.  But look at my treasures today!  They were having a half price shoe sale, and I found two lovely pairs for Autumn/Winter ($2 each, as new!), and a cute red bubble skirt and sunglasses for Miss 6 (also $2 each). 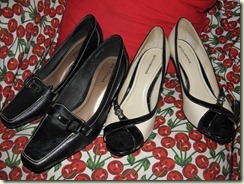 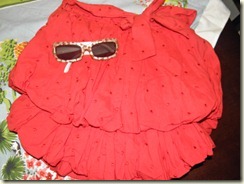 I found a book on self sufficiency for $1.50 and a practically unused Remington hairdresser/shaver set for $5.  So of course then I had to give Mr 6 a haircut! 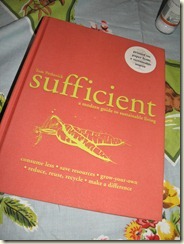 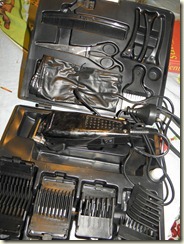 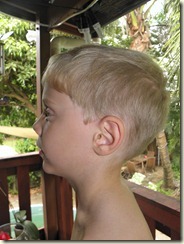 I was sorely tempted by a red wooden table and a dressing table, but I I stood strong and resisted.  So I spent around $20, and was feeling very good about my not spending year.  When I came home, however, I found that my husband had spent money on something new.  Now you may know that I love horses, and truth be told I have always wanted one of these, especially when the children were younger. But really - now I am saving for a real one! 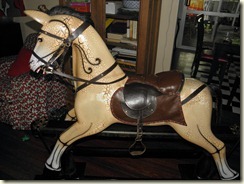 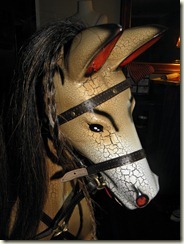 It looks older than it is, with a distressed finish, and has a sort of evil but cute carnival look.  He won’t tell me how much it was, but insists it was on special.

When I finally got home, I found that my lovely daughter had made soup for us for lunch.  She used the chicken carcass from the other nights roast, some onion, and some corn off the cob.  She added a pack of noodles for extra bulk, but we could have had it with rolls or bread.  A pinch of salt and pepper and it was wonderful. 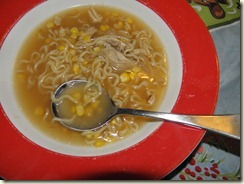 As it’s the weekend and I actually have time to cook, I attempted a beef Bourguignon.  My recipe is one I usually make, and is similar to Carolyn’s  over at The 1940s experiment. This fed our whole family of 6, so I figure my ration contributions would be half a tablespoon of oil and 1/2  a rasher of bacon.  I cook it on the stove top so as not to heat up the house with the oven, and cook it slowly for about three hours and serve with rice or mashed potatoes.

Beef Bourguignon 1942 Ration Style
You can serve it with a green salad or green vegies to brighten it up, but I thought our pumpkin mash was bright enough. 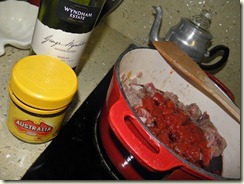 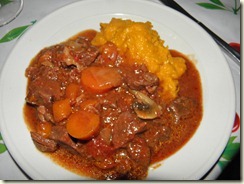 Yummy!
Onto news of the day:  The US Congress accepted an Australian proposal for dividing the Pacific into distinct naval operational zones. The two areas proposed were the Southwest Pacific  (SWPA) and the Southern Pacific (POA).    U.S. General Douglas MacArthur was appointed Supreme Allied Commander of SWPA, which included the Philippines, Borneo, the Dutch East Indies (excluding Sumatra), Australia, the Territory of New Guinea (including the Bismarck Archipelago), the western part of the Solomon Islands and some neighbouring territories. The  POA or Pacific Ocean theater of World War II, was commanded by Admiral Chester Nimitz.

Have a great weekend,
Deb xx