I finally had my haircut at the hairdressers! After 18 months of trimming it myself, I lashed out. I now have a wavy bob, that I quite like.  Miss 6 said I looked just like Miss Fisher (from Miss Fisher investigates) – I wish.   I am in between cameras at the moment (slight accident involving a horse jump), so no photo yet.

On the subject of hair, I found this ad in the June 1942 issue of Post. I love the faces, don’t you? 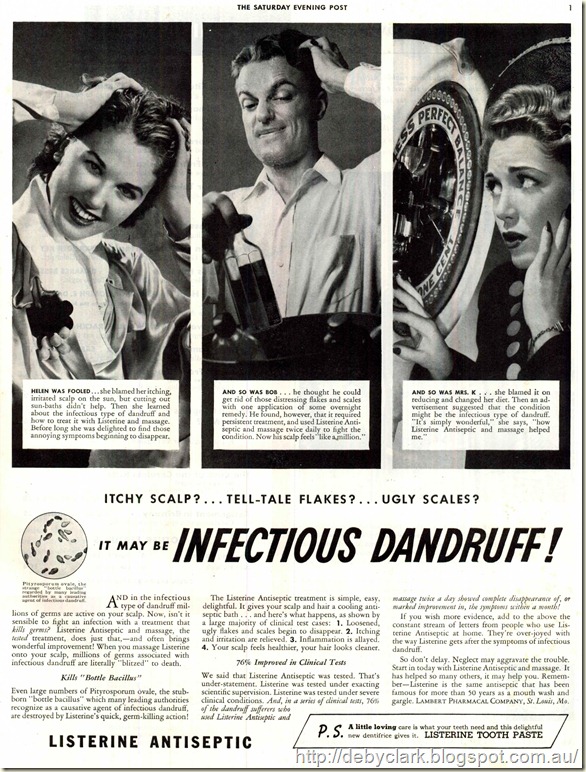 Listerine to treat dandruff does sound a bit mad, but I have heard people use it to treat rain scald on horses so it probably works.

On a more sombre note, on this day in 1942 a Warsaw underground newspaper, the Liberty Brigade, was the first public newspaper to tell the world about the death camps in Poland—almost seven months after extermination of prisoners began. It featured a story off a young Jew, Emanuel Ringelblum, who had escaped from the Chelmno death camp after being forced to bury bodies as they were thrown out of the gas vans.  The gas vans in Chelmno were used to kill up to 1,000 Jews a day, and involved gas fumes being funnelled back into a van used to transport them around the village.  This "gas van" was the death chamber for a total of 360,000 Jews from more than 200 communities in Poland.

A horrible subject I know, but I think it’s important not to forget what happened.