Ladies Fashion of the 1860s

There were two main trends in 1860s European and European-influenced fashion, which of course includes Australia.  One was characterized by extremely full skirts that used crinolines and/or hoops to give them body and often lots of of trimming and embellishment.  Crinolines were originally used in the 1830s, and were petticoats made from the material of the same name, which was  a linen mixed with horsehair. The word comes from the French for 'crin' and 'lin', meaning horsehair and linen respectively.  This thicker, but possibly itchy, material replaced the layers of petticoats that were used earlier. By the 1840s layers were gathered and sewn onto a petticoat lining, giving even more fullness. 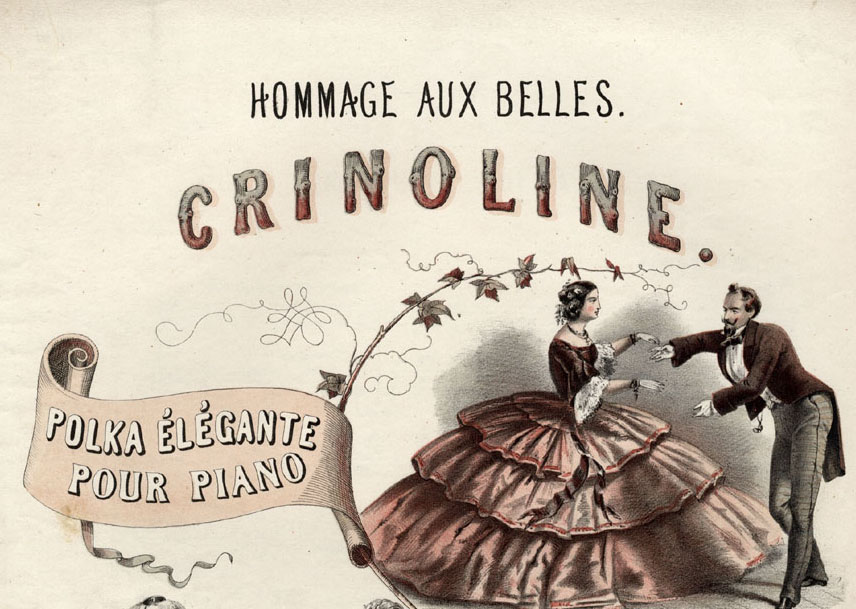 Even with all this gathering upto 6 petticoats were used to achieve the desired result.  this would be quite hot of course, and so developed the crinoline cage, or hoop in the late 1850s.  Hoops were quite involved structures made of cane and fabric, before being made and patented  in metal by an American called W. S. Thomson. These “American Cages” needed only one petticoat over them to soften the cages lines.  If you have ever worn a modern hoop under a dress, you know how awkward they can be to wear, let alone put on.  These cages did result in lots of breakages too, but the fashion persisted. 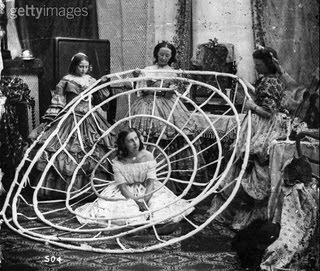 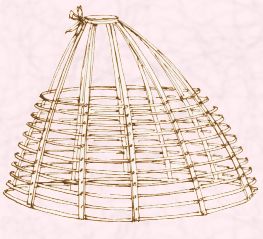 You can get a feel for the size of the skirt in Manets painting below.

This was the type of fashion common in civil war America, as portrayed in Gone with the Wind. 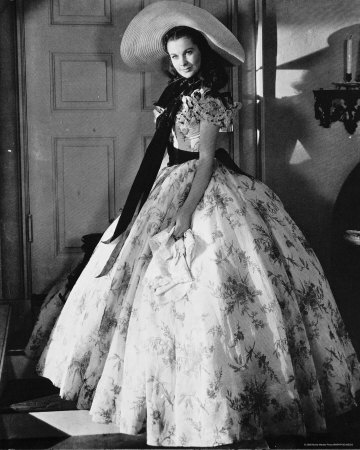 The other fashion was almost the extreme opposite, rejecting highly structured clothing in favour of simple, almost streamlined designs and beautiful fabrics. This second trend, or alternative fashion, was influenced by the Artistic Dress movement.  This Artistic form of dress was considered ‘anti-fashion’ and spread in the 1860s in literary and artistic circles, by followers of the Pre-Raphaelite Brotherhood that had formed in the late 1840s in opposition to the classical poses and art of Michelangelo (the painter of the Raphael) and his followers. They considered the fashion of rigid corsets and hoops as both ugly and dishonest. The movement itself preferred the art of Flemish and medieval painters, and the artistic style of dress was characterised by "medieval" influences such as juliette sleeves, the soft colors of vegetable dyes (rather than the artificial new pinks and purples), narrow skirts, and simple ornamentation with hand embroidery.

This style of dress can be seen below in Whistler’s painting of 1862, and also in the poster for Gone with the Wind, were the older, more sophisticated ladies seemed to be wearing more streamlined gowns by the end of the movie. 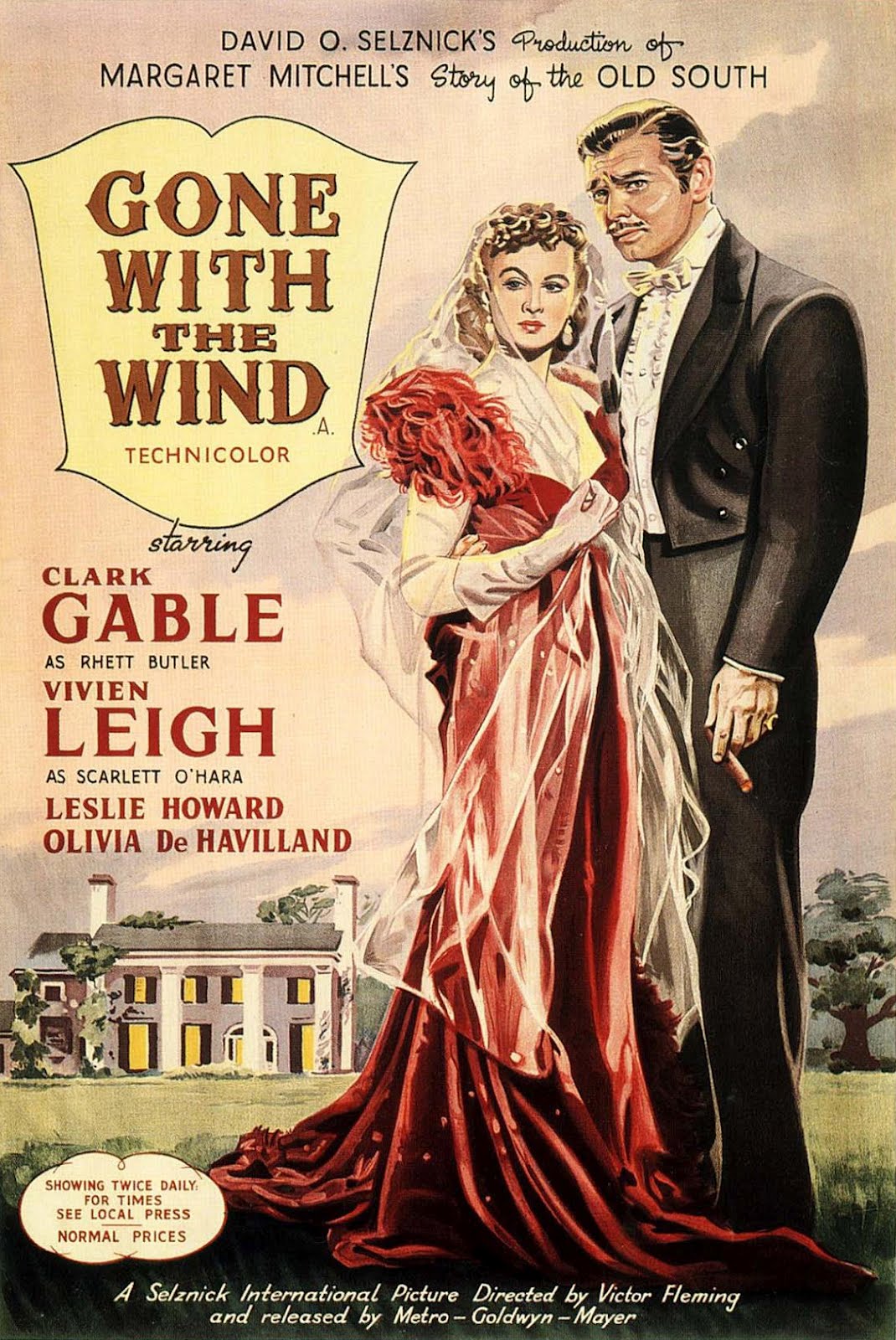 Symphony in White, No. 1 by James MacNeill Whistler, 1862. source

By the early 1860s, skirts had (thankfully) reached their ultimate width, and were quite bell shaped. Morning dresses featured wide pagoda sleeves worn over undersleeves or engageantes. High necklines with lace or tatted collars or chemisettes  (false blouse) completed the demure daytime look.  You can see these features in this 1861 plate from Godey's Lady's Book.

A few years later and the skirts became flatter at the front, but still projected out quite a way behind, as in this ad from 1865 in Harper’s Weekly. 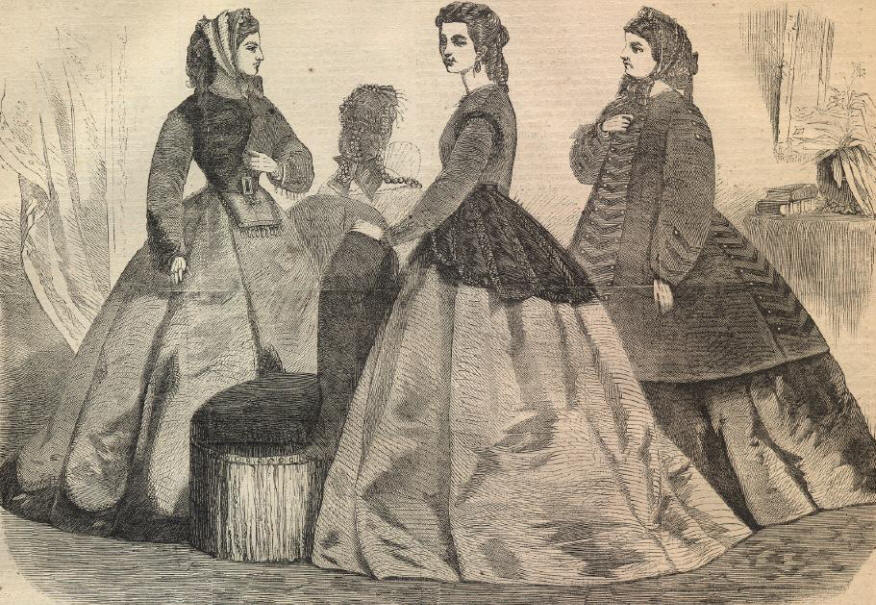 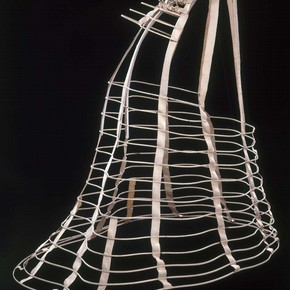 A cage crinoline with a a flatter front.

Evening dresses had low necklines and short sleeves, or even sat off the shoulder, as in the painting below.  Often short gloves or lace or crocheted fingerless mitts were worn.

Skirts were now assembled of shaped panels, to give the required width at the hem but with less bulk at the waist. Heavy silks in solid colors became fashionable for both day and evening wear.   The first chemical dyes in mauve and bright purple were discovered in 1856 and quickly became fashionable colors.  Sometimes a skirt was made with two bodices, one long-sleeved and high necked for afternoon wear and one short-sleeved and low-necked for evening.

As the decade progressed, sleeves also narrowed, and looped up overskirts became popular, either with matching or contrasting underskirts.  The crinoline gave way to the Crinolette,  a hybrid of the later bustle and crinoline, where the cage structure was still attached around the waist and extended down to the ground, but only down the back of the wearer’s legs.   There was also the ‘Tournure dress improver’ also made of the horsehair material, that was also worn at the back of the skirt

This was quickly superseded by the true bustle, which was sufficient for supporting the drapery and train at the back of the skirt.  You can see the beginning of the bustle below in an evening dress with crinolette from about 1868.

Fashions were adopted more slowly in America than in Europe. It was not uncommon for fashion plates to appear in American women's magazines a year or more after they appeared in Paris or London, and the same was true in Australia.  In the photograph below Mrs Tulley in Australia wears a very full skirt with crinoline, in about 1868.  It’s hard to see in her sitting position, but it does look like the bell shape rather than the flatter front version which was popular in Europe by now. 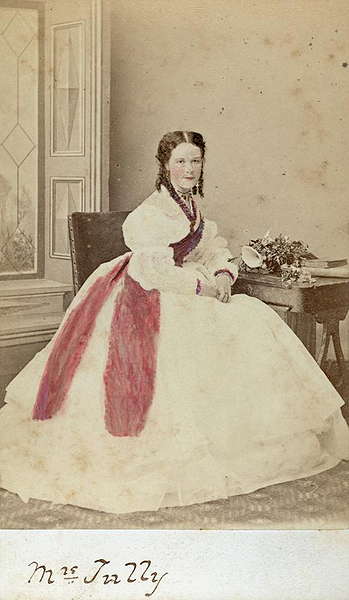 In this photo from 1866 although the skirt is full, the crinoline does not seem too large – maybe Ms Anna Darsey was not as fashion conscious. Being from Undulla, a long way west of Brisbane on the Darling Downs, maybe she just didn’t feel the need, or was she influenced by the movement? 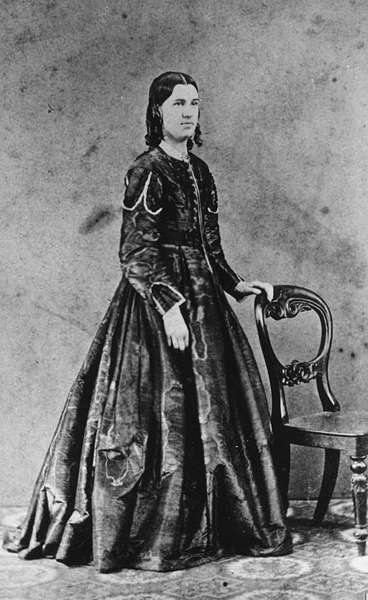 I can picture her in breeches and a blouse, as would be practical for life on a farm, but maybe she also wore a riding habit  - a fitted jacket with long sleeves, worn over a collared shirt or  chemisette. They were worn with long skirts and  fashionable hats. This 1856 French fashion plate from Journal des Demoiselles, shows a fair lady riding side-saddle with a very full skirt which reaches almost to the ground. At least there is no cage!

The fashion for long riding habits did not miss Australia.  Here is a photo from 1865 of a lady equestrian from Wangaratta, Victoria. You’d really want to have a large horse and not a pony.

These English riding habits, originally published in The Queen, Aug. 1869, are still quite long too. Let’s face it, ladies in the 1860s did not wear pants.  Even for horse riding.  Pants, or drawers,  were worn as undergarments only.  The long pants were needed in case the cages upended.  I have just ordered this Simplicity pattern – how exciting!  Far too pretty for just underwear though….

Of course the other main undergarment apart from the nightie like looses chemise, was the corset, which I will look at next time….

I really do love those riding habits though – maybe I should take up side saddle?!