Madame Alix Gres, (1903-1993) was born Germaine Emilie Krebs in Paris. She began as a sculptor, and then designed fabric, before turning her hand to fashion design.  Her training as a sculptor influenced her clothing designs - using mainly silk jersey she draped and pleated directly on the model or client in the classical Greek style, with few visible seams.

Her first fashion house in Paris was called simply 'Alix", and her simple draped designs quickly gained publicity in fashion magazines. By the time the Germans invaded Paris, Madame Gres had become  world famous, and despite being Jewish  German officers asked her to design dresses for their wives.    She refused and they closed down her design house.


In the late 1930s, she married Serge Czerefkov, sold the rights to the name Alix and adopted Gres from her husband’s first name, spelled backwards.  She opened her new house, Grès, in 1942, and her designs became even more Grecian in appearance. The dresses took hundred's of hours to make, in one or two pieces of fabric and each pleat was done by hand, molding to the wearer. 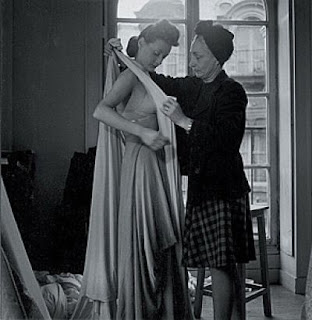 Her designs were expensive due to the hours each took, but she despised mass production and thought of herself as a true artist.  Her career spanned five decades, and in the 1950s, she began “tailoring” women’s suits, but still continued with her famous draping in her dresses.


She sold the business in the 1980s, and when it went under a Japanese fashion distributor bought the name, which became very successful in Japan, and still pays homage to Madame Gres by continuing the draping style in a more modern way.

You can see more of her designs here.