Another war film this week, this time from France.  La Grande Illusion (also known as Grand Illusion) is a 1937 WWI film directed by Jean Renoir, who co-wrote the screenplay with Charles Spaak. The title of the film comes from a book – The Great Illusion by British economist Norman Angell – which argued that war is futile because of the common economic interests of all European nations. 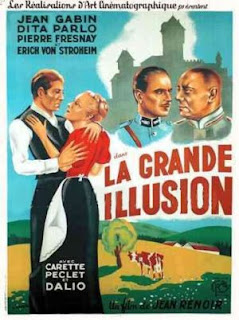 The story concerns class relationships among a small group of French officers who are prisoners of war plotting an escape.  It begins when two French aviators, upper class Captain de Boeldieu (Pierre Fresnay) and working-class Lieutenant Maréchal (Jean Gabin) set off on a flight to examine the site of a blurred spot on photos from an earlier air reconnaissance mission. They survive being shot down by a  German Rittmeister (Cavalry Captain) von Rauffenstein (Erich von Stroheim). Von Rauffenstein, upon returning to base, sends a subordinate to find out if the aviators are officers and, if so, to and are subsequently asked to lunch - they are officers after all!

Despite the semi-friendly lunch, and the discovery of mutual acquaintances, the French officers are then taken to a prisoner-of-war camp. 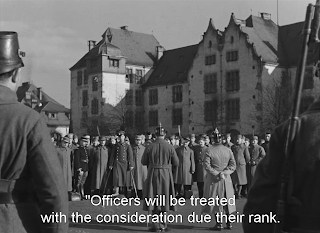 Not only are the officers treated with 'consideration', they are allowed to put on a pantomine.  A trunk of props arrives, including ladies clothes, which seems to impress some of the boys. 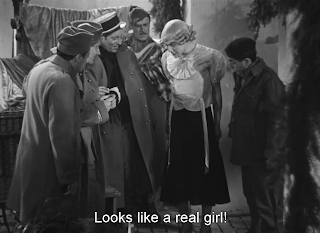 Despite some light hearted moments, the movie looks at the reality and grimness of war.  The movie reminds me of 'The Great Escape' especially when the tunnel digging begins.   Unfortunately just before it is completed, everyone is transferred to other camps, and because of the language barrier, the French prisoners are unable to pass word of the tunnel to incoming British prisoners. 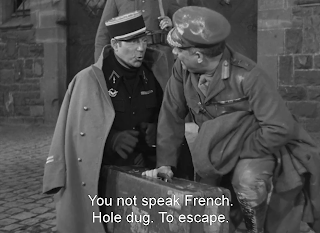 De Boeldieu and Maréchal are moved from camp to camp, trying to escape at each one, until finally they are sent to Wintersborn, a mountain fortress prison commanded by Von Rauffenstein, who tells them that Wintersborn is escape-proof. 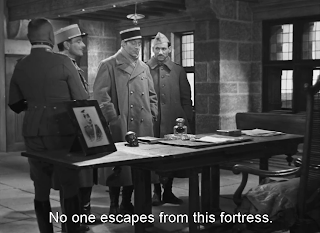 Fellow prisoner from the original camp, Rosenthal (Marcel Dalio), a wealthy French Jew, joins them, and generously shares the food parcels he receives. Maréchal and Rosenthal become pals, while  De Boeldieu has deep and meaningful conversations with Von Rauffenstein about the sure end of the aristocracy after the war.

The three Frenchmen decide to escape, again, and De Boeldieu volunteers to distract the guards for the few minutes needed for Maréchal and Rosenthal to escape.  De Boeldieu climbs a tower of the fortress,  and while the guards are aiming at him, the others lower themselves from a window by a homemade rope.   Von Rauffenstein has the guards stop shooting at de Boeldieu and pleads for him to give himself up. He refuses, and Von Rauffenstein reluctantly shoots him, wounding him fatally in the stomach. A remorseful von Rauffenstein visits de Boeldieu on his death bed and asks for  gorgiveness.  "I would have done the same", says de Boeldieu. "French or German, duty is duty." 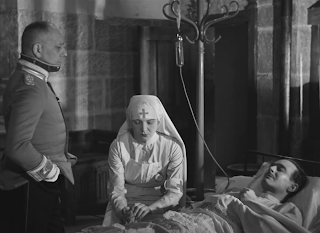 De Boeldieu also pities Von Rauffenstein, who will have to find a new purpose in the emerging social order. "To be killed in war is tragic for a commoner. For you and me it is a good way out."

Meanwhile  Maréchal and Rosenthal are trudging through the German country side, surviving on their meagre rations. 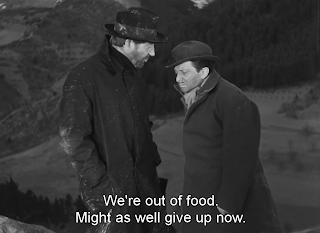 About to give up, they take shelter in a barn for the night, where they meet a German woman who invites them into her home for the night.  Warily they agree, and there is a tense moment when a German soldier appears, but his is only asking for directions.  Elsa (Dita Parlo) has lost her husband at Verdun, along with three brothers, at battles which, with quiet irony, she describes as "our greatest victories." 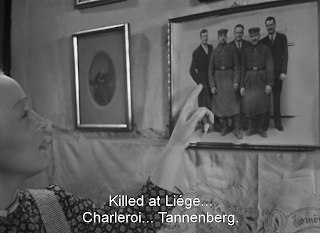 The three of them, together with Elsa's daughter Lotte, spend Christmas together, and Maréchal begins to fall in love with her. 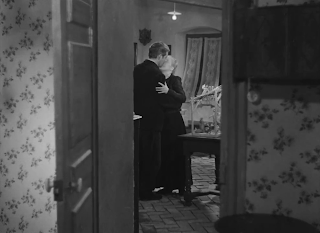 He and Rosenthal eventually leave, after Rosenthal is healed. Maréchal promises to come back for Elsa and her daughter, Lotte, after the war.  The movie ends with them just making it over the border into Switzerland, and the following German troop putting down their rifles and wishing them luck. 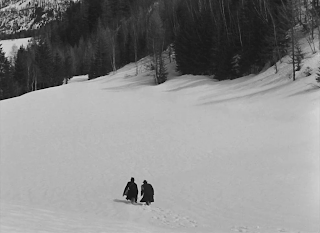 It' s a very good movie, entertaining and thought provoking.  It is another one of those movies that I wish more people had seen at the time and taken home the message.

On it's release Nazi Propaganda Minister Joseph Goebells named Grand Illusion "Cinematic Public Enemy No. I," ordering all prints to be confiscated, and even French authorities banned the film in 1940 for "as long as the war should last."  Copies that remain may not be exactly as the director intended, but we do not know what is missing, if anything.

Even so, the film won awards for Best Foreign Film at the 1938 New York Film Critics Circle Awards and the 1938 National Board of Review Awards. At the 11th Academy Awards held on February 23, 1939, La Grande Illusion became the first foreign language film nominated for the Academy Award for Best Picture.

I have tried to start a YouTube channel to put out of copyright movies on, but am in a mist of a dispute.  You can only see clips of the movie for now.  I recommend watching the whole movie if you can.