At the school fair a few weeks ago I found a 4 DVD set of 'Gidget,' the 1960s series starring Sally Fields. I loved this series as a kid - I wanted to live near the beach and surf, and for my dad to be just like Mr Lawrence (played by Don Porter).  Now I do live near the beach, but we don't have surf, but my kids love the show.  All 32 half hour episodes.  That;s a lot of Gidget. 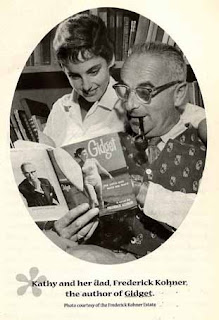 The Gidget movies and tv series were based on the 1957 novel by Frederick Kohner, who wrote about his daughter Kathy Kohner and her experiences in Malibu when she started surfing.  She was only 15 but hung out with surfers such as Miki Dora, Mike Doyle and Micky Munoz - who gave her the nickname “Gidget” (girl plus midget equals Gidget).

Now I have also tracked down the Gidget movies. Sandra Dee plays Gidget in the first movie - she is petite, but blond and definatley not Jewish, but I actually quite like her in the role.

Here's the first part of the original 'Gidget' movie.