No weight loss this week - I actually put on two kilos - that what happens when you go away for a weekend, and have your mother in law stay the week before!  I did get up early and walk on the beach though, with husband and dogs.  I even saw the sunrise! 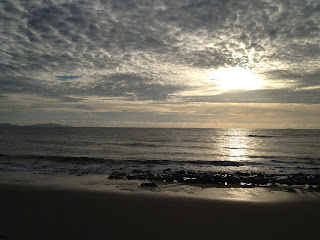 Anyway, another vintage cleaning post today - Borax. It's a real vintage must have product - a laundry booster, cleaner, pesticide, preservative and so much more. It's not entirely green, as it can build up in the soil causing it to become toxic, but it's great for those really tough stains and cleaning jobs, that you may using other, even worse and more mysterious, chemicals for. It also has other uses.


When the kids saw, and dug their hands in, my home made laundry liquid, they immediately said – Mummy, you made slime!  Not quite, but what a good idea.

Here is a basic recipe for Slime: 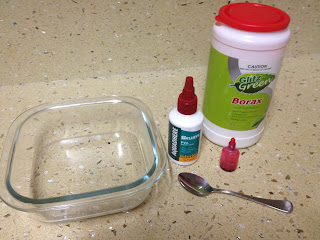 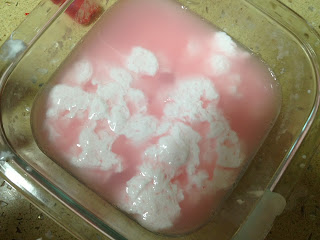 The more the slime is played with, the firmer and less sticky it will become.  We only had red food colouring (the kids have been making green milkshakes), so we added an extra tea spoon of borax powder and made a firmer slime, more like silly putty (or flubber as Olivia called it). It's a lot less messy.  Store it  in the fridge - if you can get it off the kids! 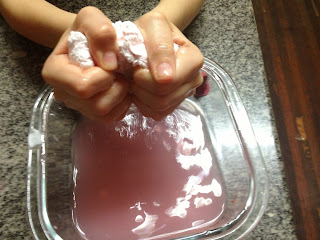 Borax is a form of hydrous sodium borate that occurs from the evaporation of saline lakes. It is normally colourless, white or light grey, but can be tinted light shades of blue, green and yellow - they would be great for slime!

Most of the world’s borates today come from the southern United States. In 1872 F M Smith, the founder of The Harmony Borax Works (now known as Rio Tinto Borax), discovered borates in the Nevada desert and by 1883 had established 20 mule teams to haul the minerals out of Death Valley More than 130 years on, the company is still one of the world’s largest producers of borates, meeting almost half of world demand.

In 1930 until 1945 The Pacific Coast Borax Company (late US Borax) sponsored Death Valley Days, a radio and television anthology dramatizing true stories of the old American West, particularly the Death Valley area. From 1952 to 1975 the show went to television,with Ronald Regan hosting the show in 1964.


Borax is my new favourite chemical at home - it kills ants and cockroaches, gets stains off carpets, helps wash my dishes and boosts the cleaning in my home made laundry liquid.  In industry Borax is used to modify the structure of glass, making it resistant to thermal or chemical attack, for use in ultra-thin LCD screens, heat resistant glass and fibreglass.  Combined with zinc, borates are used in flame retardants to coat electrical cables and in cellulose insulation, and can even be used as a nuclear containment shield. It is also being used to treat building materials to prevent termite and white ant infestations.


You know I am not keen on using the dishwasher too often, but with this powder I do not feel as guilty!


Mix the Borax and baking soda together. Then, add to your dishwasher's detergent compartment, and run as usual. It works well and doesn't leave any residue on the dishes. I put white vinegar in as a rinse aid too - it's much cheaper than Finnish liquid and works just as well.

To kill ants and cockroaches, mix together equal parts Borax and sugar. Then, place where the ants will find it. The bottom of the bin is good.